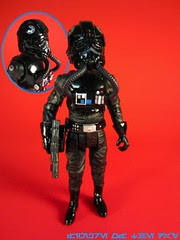 
Commentary: Sort of like the Vatican Council, but not, we Star Wars fans have had a couple of big reformations before the prequels.  1987 brought us West End Games' RPG, which renamed (or named) dozens of characters for the first time, and the second big one started in 1996 with Decipher's Customizable Card Game.  Obscure background elements like Mauler Mithel got short biographies and slowly became known entities to certain fans, so if someone knows what you were talking about when you show them this figure and go "Mauler Mithel? C'mon man!" that probably means they were active in the dorky proto-internet days of the 1990s, like I was.  Any sane person would just say "Yeah, I've got a bunch of TIE Fighter pilots."

The figure is based on the 2004 TIE Pilot figure legs with the newer chest and arms, meaning he has no ankles but can sit down just fine.  In the late 2000s Hasbro (and I guess LucasFilm) decided that the TIE Pilots could be clones, and this one is no exception.  I'm not entirely sure if this was just an oversight or someone said "who cares, just use whatever mold you have" and that was that.  TIE Pilots weren't generally depicted as clones until after the prequels, and there are illustrations specifically depicted some of these guys not as clones, but whatever.  We're here to talk toys, not doctrine.

Mauler Mithel is basically like every TIE Fighter pilot you've purchased since 2009 or so, except he has a chip in the logo on his helmet.  That's the selling point here, it's not a bad figure and is currently Hasbro's best take on the Imperial Pilot uniform.  I both appreciate and am annoyed by the various Imperial pilots that are more or less identical save for a tiny mark on the helmet, in this case I wish they would just come up with some generic human heads and mix them between Rebels and Imperials so we could get a little more variety.  Or heck, just glue the damn helmet down, that'd be fine too.   As the figure is a different character with a distinctive visual trait, I appreciate that it exists and I could get one.  Of course, if Hasbro just threw a standard TIE Pilot in the box I don't know if I'd complain all that much.  It's neat, and as long as the helmet stays on I basically like what I see.  Although an all-new helmet sculpt would be nice, Hasbro's abilities are so much better today than they were in 2004 or so that it would be nice to see them start this uniform from scratch next time.  (Maybe for Baron Fel?)

Collector's Notes:  Easily the least interesting figure in the set, unless you have pilot-free TIE Fighters, in which case you should  be mad you can't  buy more of him individually.  (Individually carded TIE Fighter Pilots were available in 2004 and 2010... and otherwise they were packed with vehicles or in figure gift sets like this one.)