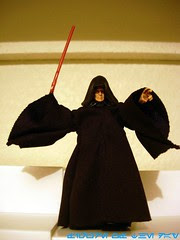 
Commentary: While this Darth Sidious is a pretty good figure, relative to how the first one in 1999 was to his peers, it's just OK.  It's not a bad figure, but part of what makes this line fun is surprises.  Sidious 2012 is a paint-by-numbers exercise reusing the good but frequently reused Palpatine body which has been making the rounds since 2005 for at least 4 other versions of the character, all of which are fundamentally the same 14-jointed figure.  This one is interesting because you get the Senator Palpatine head, which looks quite good despite not sitting on the neck of the body quite right, despite  being what seems to be a new torso with old limbs and accessories.  Ah well.  I like sculpted plastic robes quite a bit lately, while my preference is good-looking cloth, this is just a decent robe.  It's not astounding, but I don't know if this is just me being someone with high expectations.

The best Sidious or Palpatine figures, if you ask me, have generally been fully-sculpted.  The sculpts improve in each new era, but I remember being very pleased with Emperor Palpatine in 1997, Darth Sidious in 1999, and even some of the later ones.  This one clearly hits the marks of what fans expect, but I think I could have written a full review of this figure without touching it and been about 90% on the mark.   I guess it's sort of a sad commentary to say a figure has a decent head sculpt and decent articulation, but the way the head sits on the body and a cloth robe just kind of drag it down to someplace boring.  I'd be more interested in some sort of quick-change functionality, a Senator Palpatine with clamp-on robes or something.  But collectors supposedly hate having fun, so...

Collector's Notes: This figure may be at a store near you and my abacus says you should be able to find it cheaply for a couple of years to come, at least.   It is by no means rare or bad, but if you have existing Palpatine and Sidious figures you may not feel compelled to track down yet another one.