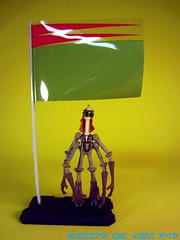 
Commentary: The funny thing about Gasgano and the entire Podracer Pilots pack is how time changes perception.  In January, the set was a pricey $27 set of repacks with new flags and little new.  Today, the latest Toys R Us exclusive sets are $40 and include no game cards or stands.  Granted, the pilots and Ewoks are better, but yeesh.  That's a big difference.

Gasgano is fundamentally the same as his 1999 ancestor, with a jointed waist, a jointed neck, and four jointed arms.  The arms pop off easily if you aren't careful, and while the colors might be a smidgen richer, I think it could also just be chalked up to a batch variant.  In other words, it's different, but not hugely so. The big changes seem to be on the shoulders, the 2012 release has cleaner yellow stripes and circles, while the designs are much thicker on the 1999 original.  The various hoses on the costume are also a smidgen sharper, but if you need to ask me if it's different enough and improved enough to be worth your hard-earned money, the answer I would give is always "no." The main reason to purchase this set is for the flag accessory, which has a white plastic pole and a clear flag with a green rectangle and two red triangles bringing it to life.   The packaging and accessories are neat, but the figure itself just isn't that improved or different to get excited over.

Collector's Notes:  Many Toys R Us stores are well-stocked with these, so I would suggest waiting for a sale or using a coupon.  If you do not have any of these figures, the set is actually quite a deal, but the individually packaged figures came with unique droids and other accessories that may make them worth buying anyway.  (Well, maybe not Mars Guo & Dud Bolt.)