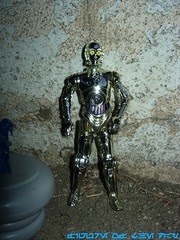 Bio:     The worry-prone droid is repaired after an unfortunate encounter with Tusken Raiders while he and Luke search for R2-D2.  (Taken from the figure's packaging.)


Commentary: Hasbro likes this C-3PO mold a lot.  Starting life in 2005, the figure was redesigned with knees in 2006 and has been repainted and reused many times since.   This particular version is similar to the 2006 Endor Throne version, except there's no throne and Threepio now has some oily smudges on his person.  Seriously, this figure's claim to fame is black oil stains.  It's also a little paler than his brothers, but it's still not bad.  The yellow eyes are very expressive, and the articulation is somewhat limited.  He can sit fairly well, and he has knee joints, but there's not a lot going on there.  The Vintage 2010 version has more mobility, but this one is shiny and shiny is worth something to true 1980s vintage enthusiasts.  I would not say that this C-3PO is necessarily the best version of this mold, as they are all quite similar, but it's good enough to get if you were going to get the Battle Pack anyway.

Collector's Notes:  This set was tough to get, but eventually dumped at stores like Ross on the cheap.  The sets go for roughly retail, if not a few bucks below, on eBay.  Since R2-D2, Luke, and Obi-Wan are debatably the  best versions, it's worth it.