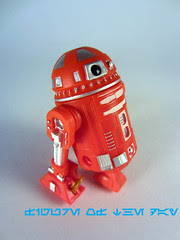 Commentary: The Red R9-Series Astromech Droid kicks off our look at these quasi-figures, because, let's face it, they're tough to categorize given there are technically near-infinite mismatched combinations of body parts from which to build.  Sold sort of like a Mr. Potato Head, you can go to Disney Hollywood Studios (not Magic Kingdom, not Epcot) in Orlando and put together a droid of your choosing.  Since the eyes are the windows to the soul, I figure the head is where we're going to assign names and as such, each "Droid Factory" figure will be written up by its dome and one of many possible builds.  Special thanks to Mike, Michael, Shannon, and Daniel for your assistance in these upcoming 25 or so features.  (But not all at once, of course.)  Why R9 first? That's what you guys voted for, so here goes!

The design for the R9-series was pretty off my radar, basically anything not appearing in the games or comics or toy line is invisible.  It might just be the deco or materials used, but I feel the R9 is the weakest of the astromech droid dome sculpts.  It just seems a little soft, of course the illustration isn't exactly brimming with detail.  The eye is a little small in spots, it's that the deco isn't doing it any favors.  The silver blips around the "neck"add some sparkle, but the molded detail like the projectors are all quite small and a blue dot on the side of the head blends into the silver. I appreciate that it's there, it's just that I didn't notice it despite it being on my desk for a few days.  The "floppy drive" under the eye is also gone, so that slot for data or what have you isn't there.  I'm not saying it's a bad design, and since it's a largely unknown one my criticisms are based entirely on a comparison with a drawing I saw from a magazine scanned and posted on the web.  As a design unto itself, it's cute.  As an authentic recreation of an existing design, I'm not so sure.

Like the R9, the R8 almost feels like a design step back from R2's dome and seems simpler.  If this is how the older droids in The Phantom Menace looked I'd say "Ah, OK, that makes sense."  From a design standpoint there's just so much more going on with R2-D2 or R4-D4,   The blue one looks like it has more visual pop, but we'll get to him later.  The red one is neat and different than other droids you have, which is cool, but since we now know Star Wars at Hasbro will be running up through 2020 (barring a crisis) I suspect we'll see another take on this model eventually.

Collector's Notes:  This item was a customizable release at Disney Hollywood Studios in Orlando, and you can configure them any way you wish.  I wouldn't go too crazy with the mismatched legs, but I'm an old kook who even as a kid didn't "get" mismatched limbs on things.   I wish Disney opted out of a "dig through mismatched bins and try to decide on a figure" concept in favor of a "here's a sack of parts for $30, make whatever you want at home" thing.  But I'm lazy.   When I go to the theme park I just want to make it fast, you can spend hours building these things which is a real good reason to buy several.  I keep switching around parts and pieces and they're really fun to mess around with.

25 domes? Well, that about wraps it up for my being an astromech completist.

and those 25 domes of course have many different body options. i already have 24 different droids from the droid factory and i'm still missing 8 of the domes, and 1 of the bodies.

Hasbro thru 2020? Did I miss an extension announcement?

I got ten Disney BAD's when I was down there for CVI and it still feels like I barely scratched the surface.
It's a great idea and definitely a fun activity and fun souvenir, but also kind of frustrating now that I'm a thousand miles away and want the rest too.