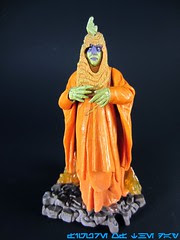 Bio: This humanoid senator once served the Galactic Republic. Argente later committed the forces of the Corporate Alliance to aid the Separatists in battle. He is instructed to go to Mustafar and await the arrival of Darth Sidious’ new apprentice, Darth Vader.  (Taken from the figure's packaging.)

Commentary: Why have one Passel Argente when you can have two?  The first release from 2003 wore green, and this redeco is orange.  As an added bonus, this figure has a small lightsaber slash in the chest which is a fun wound as wounds can go.  OK, so maybe it isn't so much fun but it is very orange.  He has limited articulation and was a part of a once-proud tradition: the obligatory year-end repaint wave.  (These are pretty much gone now.)  It has no special articulation to speak of, and he stands best with the support of the firey Mustafar display base.  The base itself is a PVC fixture which sort of bends out of shape funny.  As such, it may not be ideal.   It's a decent figure, but not one that was too impressive in 2005 and today starts to feel a little bit older.  It's still not bad.

Collector's Notes:  Not all "last wave" figures are rare and valuable.  This one came out at the very end of Revenge of the Sith's toy run and came out at one per case, in few cases.  Being unpopular can work wonders on keeping figures affordable, and this one still is pretty cheap.

That bright orange might be accurate to his appearance in RotS, but it's a real turnoff for me. Maybe I'll add some blue highlights and put him to work with my Star Tours crew.

The repaint wave of ROTS was by far one of the coolest repaint waves. Loved both Passel Argente and Obi Wans R2 unit. Also the holographic Jedis were just frosting on top.
This figure brings back warm memories.