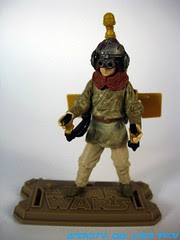 Bio:  Thought still just a boy, Anakin Skywalker is already a gifted mechanic.  He builds devices like a jet-powered backpack using bits and pieces thrown away by Watto, the junk dealer who owns the young slave.  Anakin uses his mechanical ability to construct his own Podracer and rebuild a discarded protocol droid named C-3PO.  (Taken from the figure's box.)

Commentary: Fun fact: this Anakin Skywalker and the Vintage "Padawan" versions were the first new preteen figures of the character since roughly 2001.  Little boy Anakin got a repaint or two in things like the Jedi High Council, but Hasbro dropped The Phantom Menace like a bad habit in 2001 and aside from a few token figures a year, it went largely ignored.  Sure, there was the odd theme wave, but they were far and few between.  For the 3D rereleased of the movie nobody was clamoring to see in the first place since we all just bought the Blu-Rays, Hasbro made a new "toy" figure assortment which had great sculpts and fun accessories.  In Anakin's case, they also had iffy paint.   While there's a delightful layer of dirt and grime with a nice paint job on his face and helmet, take a look at his belt.  The area directly below the belt was left unpainted, and why I'll never know.  Maybe Hasbro said "Well if he's sitting down, the clothes would be folded over and dust wouldn't get in it."  But that kind of rationalization doesn't sit well with me, it looks funky and I can't really tell you that it doesn't.  Anakin sports six points of articulation and has a nice likeness to the actor whose appearance in this movie resulted in his early retirement from the cinmea.

The reason to buy it, aside from the decent figure, is the backpack.  I love it-- it's big and goofy, it looks like Hasbro asked its 1990s Batman team to craft a Pod Racer-esque weapon for the young boy.  The very notion that a small boy, even one with magical powers, just happened to build a jet-powered rocket pack of death out of junk he found laying around is so absurd you can't help but love it.  It may not have a strong movie connection, but it looks sufficiently Star Wars-y, is fun to play with, and is a kajillion times better than a spanner as an accessory.  It's fun, I approve.

My only real beef about this figure is that it was the only new "Tatooine" Anakin designed for 2012 and it doesn't fit in the Pod Racer.  None of the Anakin figures sold in 2012 fit in the Pod Racer.  The only one that really fits was packaged with the original release of the vehicle in 1999, which to me shows that one thing that hasn't changed over the years was Hasbro's ability to not play with these things before they come out.   Get Anakin because he's the best version of the character in his main movie outfit-- don't get him as a vehicle pilot.  Trust me.  I would very much like to see Hasbro make more figures like this-- good sculpt, limited articulation, insane accessories-- so if you're reading Hasbro, nicely done, and more, please.  If you only buy one Anakin figure, this is probably your best overall pick.   I know, I complain a lot, but it's still really good.

Collector's Notes:  This figure has been in semi-decent circulation since he debuted, I've seen more of him at drug stores than toy stores. eBayers sell him for as little as $4 but he's usually closer to $13.  Retail stores are about $9.