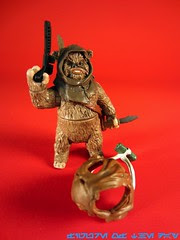 Commentary: With two hoods and a name previously assigned to an Ewok god, Flitchee is something of a mystery.  Even the packaging shows a different sculpt from the final figure, on the box the picture shows what seems to be a repaint of the 2009 Paploo, while the final product is a repainted Leektar head on a retooled Paploo/Leektar/Romba/etc. body, I think.  Given the arm positions and a lack of a sculpted belt, anyway, that's what it seems like to me.

He's pretty neat.  I'm almost disappointed they stuck him in a boxed set, because he has two sets of gear to use.  There's an all-new hood (pictured) sculpted especially for this set, but he's packaged wearing a redecorated Graak hood.  If that means anything to you.  So basically it looks like he's an old figure with an old head and a new sash, the weapons are rehashed from a Stormtrooper and Leektar.  It's new enough to be interesting, and it has enough gear that it's basically two Ewoks in one.  Given how I don't even know how "correct" it is since I'm not 100% sure which movie Ewok, if any, Hasbro was attempting to replicate, this guy seems to have found one that looks like the figure in Graak's hood.

I really prefer the alternate hood and pouch as pictured.  It's a tight fit, but it fits like a glove.  The gun is a cute bonus, as a kid I frequently gave my Ewoks the guns of their fallen foes, especially after seeing the two Ewok movies on the teevee.   I'm torn between his two looks, but that's why I'll probably buy another of this set as soon as there's some sort of worthwhile discount at the Toys R Us.

Collector's Notes: The set started showing up about a month ago, and dang if it isn't fun.   You should be able to find it with a little work, and while the bang for the buck isn't there (2.5 Ewok 2-packs should be about $25 tops, and this is $40) I find the set interesting enough-- particularly with all the variant gear-- to warrant the price.  If I were buying this set on the secondary market in the future, and it's off TRU shelves, I'd have no problem dropping $50 on it.  It's worth it.  I pay $8 for Glyos figures, and I love those.  So I can pay $8 for an Ewok.