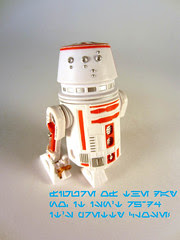 Commentary: The Red R5-Series Astromech Droid is not R5-D4, but it's close.  It's so close where I think this will fall under "just different enough to make you mad," but I like this figure so much that I wouldn't ask for a Red Robot Refund.  (I LOVE YOU SERVOTRON!)  The dome itself is, of course, the main piece we're examining and it departs from R5-D4 and R5-D8 in a couple of meaningful ways.  R5-D5's double-stripe at the top of the dome is a single (like R5-D8.)  The head is clean and devoid of dirt, also like D8.  It lacks the antenna of other mass-released R5 units, and the big silver stripe where the dome meets the body is gone, and is replaced by a band in between the two bands on the "neck," if that makes sense to you.  If it doesn't, just nod and go along with me that this is just going to make you mad.

The body I went with was Red R2 with Red and White Legs.  This makes it very similar to R5-D4s released before, but there are numerous red boxes on the back of the figure and any blue from R5-D4 or R5-D8 is now gone.  It's a purely red robot.  Certain panels have been tweaked a bit and in all honesty, the vast majority of you will have no reason to pick up this figure unless you're crazy for astromech droids and need all of the parts... and I do.  It's also very similar to the original 1979 Kenner R5-D4, which, really, is the reason I like this figure the most.  Granted, it ain't a perfect Kenner update but it's nice and it's just different enough to be worthwhile, unless you're looking to cut corners in your robot stash.

Collector's Notes:  This item was a customizable release at Disney Hollywood Studios in Orlando, and you can configure them any way you wish.  Considering there's a super-swell green version, the red R5 unit is probably going to be one of the last ones you chase down.