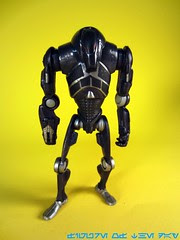 Commentary: Sometimes Hasbro will crank out repaints that come from a place I don't quite know.  The Cylon-like Super Battle Droid hit the stores in 2008 as one of the last Battle Packs in its assortment.   It has no weapons, but the deco is really nice.  The dark, almost black glossy figure has covered in some nifty silver detailing.  Check out the patterns on the chest and on the joints, as they make certain parts of the figure pop nicely.   The gun on the hand is also decorated, which certainly helps give it a little life.  The key feature on this figure is that the eyes are painted red, which really sets it apart from other releases.  While not quite super articulated, this mostly-articulated figure is based on one of the better molds for this character and is totally worth getting if you aren't married to the idea that all figures you buy from these movies are actually from the movies.

Collector's Notes:  I saw this set at Toys R Us a few times, and online, but they're gone now.  The prices aren't terrible for the set, and because of the different droids I'd suggest getting it.  Each of the five figures are different enough to be interesting, but this one is particularly cool.