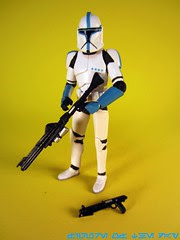 Commentary: So first thing's first, my Clone Trooper Lieutenant has no eyebrows.  Looking around, it appears I got "lucky."  Harrumph.  Anyway.

The figure is a redeco of the 2011 Clone Trooper body, which looks fantastic but like many super-articulated figures, is sort of a nuisance to pose to get to stand properly.  The lack of display stands is sort of annoying, because you have a largely exquisitely decorated action figure with a few sweet spots, but getting it just right can be tricky.  The plain white figure is devoid of damage, and was given blue stripes which, frankly, give the figure a lot more blue than I would have expected.  I like it.  The shade of blue is different from previous releases, looking closer to what we saw in the 2003 Clone Wars cartoon, even if just by a bit.  The helmet sculpt and deco are great, and if your figure had eyebrows, you might not assume he is an ancient Egyptian whose cat just died.

If you haven't bought one of these before, the articulation is pretty impressive.  Ball-jointed hips are joined by bend-and-swivel wrists, giving the figure a very bendable 14 points of useful articulation.  When you add the slick deco, it seems Hasbro is going for colors which will look better on your shelf and make you mad you army-built between 2002 and 2010.  I can hear them laughing now.  "Suckers!"  Of course, it's borderline impossible to troop-build these days given the higher prices and lack of availability, so just get one and enjoy it.

Where the figure really shines is in its weapons.  Like the 2011 plain white figure, his weapons have paint operations in silver and bronze, which do a lot to add some visual heft to an otherwise bland gun.  After all, most of the guns have been unpainted since 1978, which was more or less normally the case except for lightsabers starting in 1995.  The overall figure, especially if you leave the helmet on, isn't half bad and is probably more than worth your while to buy if you can find it.  This is, of course, the trick.

Collector's Notes: Distribution is what it is, but I did see this one a couple of times over the last few days between Toys R Us and Kmart. The figure is sold in 3 different ways: a San Diego Comic-Con Exclusive boxed set, and two "vintage" packages for retail.  One is based on the classic Kenner packaging, and the other is a blue and black cardback based on a rejected Vintage artwork from the 1970s.  I prefer the standard black and silver, but it's certainly nice to see this new concept brought to life.