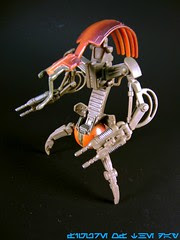 Bio: Battle Droids are produced in massive foundries on Geonosis. Despite a treaty forbidding the expansion of those armies, Geonosian foundries are currently running at maximum capacity, with thousands more battle droids secretly massing on Geonosis. Destroyer Droids, also known as droidekas, are engineered specifically as mobile machines of destruction, capable of eliminating practically any opposition. They roll into battle in the shape of a wheel, then unfold to full-standing combat stance for assault. Super Battle Droids operate independently rather than in groups, making them stronger, more efficient models of technological weaponry.  (Taken from the set's cardback.)


Commentary: The least remarkable Destroyer Droid sculpt would come in 2003 in 2 different versions.  One, in the three-pack, another in a "Destroyer Droid Launcher" set in the very same assortment.  The droids are fundamentally the same, and are just as cheap in the other figures in the set.  I don't mean this as a negative, I'd lose my mind if we got 3 different army-builders in a box for $10 regardless of articulation.  Limited articulation and limited deco are the name of the game, and this figure is an understandable step back from the 1999, 2000, and even rocket-blasting 2002 releases.

With six points of articulation, it's nothing to get excited for unless you're in need for high-quality display and diorama filler.  The legs rotate, which does you very little good.  The arms are hinged at the shoulders, so you get a little bit of lateral movement in the arms.  The neck also can "nod" up and down, but that's about it.  It lacks the rich metallic coloring of its siblings, its lighter brown body very much does make it look and feel cheaper.   A few more pennies spent on deco could make this figure look like a million bucks, but for three bucks, it's still pretty decent.   I'd only suggest getting this one if you're particularly enamored with this faction of the Star Wars universe, or enjoy a nifty, cheap thrill that, like action-feature figures, are something of a divergence from the norm for this mind-bogglingly long running action figure line.  (Seriously man, it's been like 17 years!)

Collector's Notes:  This set goes for about $10 in the package still, although I'm sure you can get it cheaper if you're patient or buy it in a modest collection or lot.  It's a nice set for the price, $3 per figure is pretty good considering what $2 or $3 will get you at the toy store today.  And that is usually nothing... or two Fighter Pods figures, which isn't much to get excited about as dollars go.