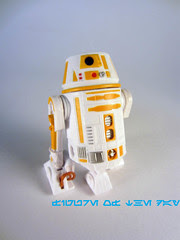 
Commentary: The most adorable of the many domes is the new R6 droid, shown here in yellow.   The new design borrows from R4, R5, and R2 heads with a trapezoid-ish shape flush against the body, and the "face" of a traditional R2 unit planted in the middle.  The panels on top are similar to R5s, as are some silver details on the sides and backs.  On the day I visited the theme park, the yellow was the only R6 remaining and they were super-low on him too.

The body is pretty much whatever you want to make.  Mine is made of a white astromech R2 body with yellow highlights, matching legs, and a central white leg stalk.   Optional hats include Indiana Jones' fedora, Yoda ears on a baseball cap, Goofy's ear hat, Mickey Mouse ears in red, green, blue, or black, plus Jack Sparrow's pirate hat.  (Or not hat at all, if your name is Daniel and you live in New Zealand.)  I opted to build him off the yellow R2-D2 chassis, because it matches nicely and looks really cool.  Had they a yellow droid body, I'd probably have tried that too.  Of course, that's probably on deck for next year.  I think this was my favorite take-home from Celebration VI, as, frankly, the Droid Factory was my main shopping destination at the show.  I can get most of this crap on eBay any day, but these droids are, if purchased in one visit, significantly cheaper at the theme park than via mail order.

General Notes: The mix-and-match bins at the park are a nightmare to dig through, as finding matching left and right legs (or specific central legs) can be difficult.  It's not as well-organized as the brick bins at a LEGO retail store.  Best-case scenario, building enough droids to get at least one of every part will set you back about $252 before sales tax.  At the Disney Merchandise Panel at Celebration VI, they indicated plans for the feature to be available in Anaheim "soon" and that additional parts would be rotated in so you have a reason to pull out whatever hair you have left. (Seriously, no kid is going to need to ferret through 300 droid parts, what benefit is there to do this other than irritate older fans?  Ditto the customizable packaging-- it's bulky and takes up room in luggage, and kids will throw it away when they get home.  It just adds cost.) While all of the bodies are recycled tooling, all of the domes are retooled or new tooling (as they feature a hole for a hat) and the hats are, obviously, more or less new tooling.  These guys are a ton of fun to build, take apart, and rebuild and I just wish there was an easier way to get a bunch of pieces.  Applying the Mr. Potato Head play pattern to action figures is a ton of fun (ask any fans of Stikfas, Glyos, or Xevoz) and it's a crying shame that these awesome pieces are held back as premium parts in basic figures, or as theme park exclusives.  I'd love to see Hasbro include a random Astromech Droid piece in every 3 3/4-inch item, so kids (and adults) can make frankendroids or send them to their pal Seth to attack with cans of Monster Kolor paint.  (Just thinking out loud, Seth.)

Collector's Notes:  This item was a customizable release at Disney Hollywood Studios in Orlando, and you can configure them any way you wish.  Samples on eBay are preposterously expensive, and sell at the park for a not-too-outlandish $2 for $20.   There are 25 unique domes to collect, which I would suggest you make the brunt of your collecting efforts.  (My notes say I need about 7 domes at this point as the park was actually out of several that day.)   If you believe there 25 heads (fact) and 13 bodies with matching color limbs (in my opinion, anyway) this gives you 325 unique builds, ignoring hats.   I would suggest collecting this like you might a construction set-- just try to get at least 1 of each piece.  With that logic, I need 9 total pieces at this stage.

I don't need no stinkin hat. Yellow R6 though - that be pure plasti clove.