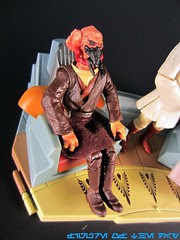 
Commentary: In 2004, I thought these sets were weak.  Today, I'm just not happy with them.  What we have here is a half-assed figure with a fairly decent degree of execution.   "I see what you did there" is the name of the game, and as a collector I had no real interest in these sets because  it was obvious Hasbro didn't put in 110%.  62%, maybe.

The Jedi High Council was made back when a lot of exclusives were dashed together and didn't get a lot of new tooling, so it's no wonder that Plo Koon could be one of the "better" figures simply by giving an existing figure a cloth skirt and knee joints.    When I say "better" I mean that loosely-- this is a 2002 sculpt, from when Hasbro was doing some really neat action figures which were, for all intents and purposes, small statues.  They looked great standing around, but Hasbro raided the tooling jar for these sets, and from the waist-up he's still a figure fighting a lightsaber duel on Geonosis.  He looks awkward sitting or standing, he doesn't quite fit into the chair-- Hasbro's ability to make a figure sit well is traditionally frowned upon-- so I'm left with a real sense of "why bother?" with this one.  I appreciate the cloth element to allow for sitting, and the color matches the plastic fairly well for its era.  The sculpt quality is good, but the pose is wonky and the lack of lightsabers in these sets, especially given how much recycling was done, just sort of makes me angry.

On many levels I am mad at myself for buying it in 2004 when I could have spent that money on, say, anything else.  The set's main selling point is a floor and some chairs, the figures themselves were not and are not worth the asking price.  This is a scenario Hasbro could revisit and knock out of the park today-- drop the holes in the floor, make figures that can really sit, and exploit the fact that we have some really good sculpts now.

Collector's Notes:  These sets go high and low on eBay.  Sometimes a single council scene sells for $50, and sometimes a lot of 3 of them goes for $26.  It doesn't make any sense.  Just know that when you track these down-- and as a diorama fan, you will eventually track these down-- there is not more than meets the eye.  There aren't hidden lightsabers under the chairs.   What you see is what you get, and what you get isn't very good.