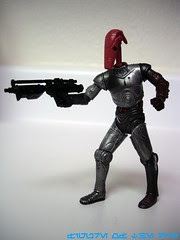 Commentary: When is C-3PO not C-3PO?  When it's based on the 4-LOM body!  This super-articulated figure is swimming in moving parts and fantastic paint detailing, plus it has a removable head which can be swapped out for a Battle Droid just like in the movies.  This version looks way better than the 2002 deluxe release (which was subsequently repackaged in 2006 and 2007), and I assume the reason Hasbro went with the 4-LOM body, aside from it being unused most years, was because the hands were ready to grip a blaster.  That's something most C-3POs cannot do.  This 2-pack is a lot of fun, so if the price is right go ahead and get it.  Both figures are improved over previous releases.

Collector's Notes:  This set dried up pretty quickly.  They were all over in late 2010, and then suddenly vanished in a pile of what seemed to be a new shipment (but not new production, if you checked the date stamps, and I did) of the 2009 arena packs.  The 2010 sets were pretty nice, but as they're harder to get you may have to shell out for them.  I can't help but wonder if more are out there to be had, or if figures like this one are due to be repackaged in light of the upcoming 3D rereleases.

I absolutely had to have this set. I was not collecting the Geonosis Arena sets, but thought this one was a particularly stellar release. The Threepio is beyond amazing. The paint applications (considering this to be a "budget" repack exclusive) beat the tin pants off the previous releases of Episode II Threepio. The Artoo was a nice bonus with some of his little gadgets included in the sculpt.