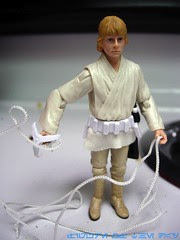 Commentary: The center of Star Wars is either Luke Skywalker or Darth Vader, depending on who you ask.  I think more of the old-school fans would argue it's Luke because prequels, eh.   This version is a mishmash of new and existing parts, being part of the Vintage Collection's only real "repaint" wave.  Of course, that's something of a misnomer as it's a retooled figure with some cool new accessories.

Luke is made of a new belt and cloth tunic piece, with the legs from the 2004 Vintage figure and arms from the 2007 30th Anniversary Collection release.  The head has been used elsewhere, arguably decorated better in the Resurgence of the Jedi Battle Pack.  He can sit fairly well and with 14 points of articulation, has no real problems having a function as a plaything.  You want to cram him in a vehicle or playset?  Not a problem!   Need a figure to swing across the Death Star chasm?  This one works!

The coloring of the costume is fantastic, but the skin color looks a little pale.  The sculpt is decent, but the best-overall Luke figure is still probably the 2008 Resurgence of the Jedi Battle Pack one.  (Which also has a pretty swell R2-D2 in there.)

Collector's Notes:  This wave, depending on where you lived or shopped, may have been pretty common.  Luke is still around in my neighborhood at a grocery store as of when I write this, but you can probably get one online if you want to at a decent price.

FYI - This Luke head is not the same sculpt as the Resurgence Luke. Take a closer look. This head sculpt is not as good and you will see the difference in the hair.