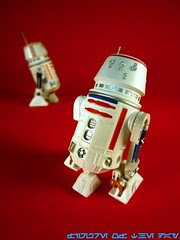 Commentary: Part of me thinks that R5-D8 exists because Hasbro did one for Galactic Heroes (R5-D4 prepackaged) and had to do it for the figure line.  I could be wrong, because R5-D8 the action figure has new and different deco from R5-D4, but Galactic Heroes R5-D8 has different deco than Action Figure R5-D8.  Galactic Heroes R5-D8 (which was later repackaged with no changes as R5-D4) featured yellow stripes painted in the red parts of the figure which I thought were weird, but they're also present on the new Jek Porkins figure's helmet.  So now that we have two R5-D8 toys with notably different deco, it's a safe bet that Lucasfilm never really developed a template for this droid and for all intents and purposes, toy designers get to make it up as they go.  Which, frankly, I'm cool with because these little differences are far more interesting than always coming out with a sanitary, consistent, identical product all the time.

To judge this figure on criteria like "film authenticity" is almost laughable, because the number of people who could pick this figure out from the movie before getting a toy of it is minimal.  To make this new droid-- or at least, one that looks distinctive-- Hasbro used the R5 build-a-droid mold and slapped on some different colors.  The reds are richer and deeper, the blue stripe below his dome is painted, the segments on top of his dome are now silver, and many blue chest panels are now silver as well.  The droid is clean, with pale silver eyes and a backside that's bright white and largely blank.  While R5-D5 has a double-border along the top of his dome, D8 has but a single line, and no lines highlighting some of his panels on the sides of his head.  To anyone who owns an R5-D4 figure, or at least to me, there was no doubt that this figure was decorated differently from what I had.  It's similar, sure, but different enough to make things interesting.  Which is good, because that makes Mauler Mithel the dud of the set.

For a figure I always assumed would be a straight-up repack of R5-D4, I'm delighted Hasbro opted to change the deco of R5-D8 to make it enticing as another white R5 with red, blue, and silver highlights can be.   With little reference with which to compare him, I'm going to say Hasbro did a great job, as I have no evidence to the contrary.  Their interpretation, or translation, of this figure to plastic is colored differently enough that even if it's wrong, I still dig the new and different design for what it is.  I believe Hasbro reused an R5-D4 photo to identify R5-D8 during the Power of the Jedi Force Files, so either Lucasfilm used the same prop and Hasbro decided to mix things up a bit-- which is fine by me-- or nobody really knows what this robot should look like... which is also fine by me.

Collector's Notes:  This set is $40 at Toys R Us if they have it which, well, it's a mixed blessing.  Basic figures are $9 or $10 these days, so 5 for $40 works out to $8 per figure.   It's tolerable, especially compared to the short Ewok pack at $40... and Ewoks were 3 for $10 during Walmart's last comic pack, and that was regular retail.    I really liked the yellow markings of the Galactic Heroes Porkins Droid, but since most of you cats probably didn't get that one, well, you don't know what you're missing.  It's neat.