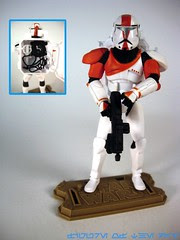 Bio:  Republic Commando Boss is the sergeant in Delta Squad, an elite unit of clone troopers. He receives standard clone trooper combat training on Kamino, then is put through additional training that is extremely tough, but it makes Boss an aggressively effective trooper able to survive the demanding missions given to Delta Squad.    (Taken from the figure's product information page.)


Commentary: The direction of The Clone Wars as a toy line is tough to discern at this stage.  Few new characters are introduced, and few troopers are making the cut.  We did get Republic Commando Boss, which is one of at least five commando figures confirmed to appear on the show so far.  Using this mold, they could probably crank out a few more of these guys, although Hasbro seems less and less keen on doing this sort of thing lately given that there may well be a five or six month gap between new releases in the cartoon style.

A new sculpt, this bulky figure doesn't have the 14 points of articulation you might demand, but it's still quite good.  The detail is clean, the paint job is excellent, and you might not notice the lack of articulation below the hips.   This figure is a more interesting toy than most due to its backpack accessory.   Rather than being a figure with gun, he's got a mission pack with a zipline, plus three guns to blast away at whatever he so chooses.  The smaller accessories all fit in the backpack, and I have to say the backpack itself is an incredibly cool accessory that I hope they consider putting with other releases.  It has little problem standing and as you can see, the orange looks pretty great.  Sadly his brothers Scorch, Sev, and Fixer are not yet available in this format but as long as the line doesn't implode, I would assume they're on the way eventually.

The design is quite similar to the video game character, but the shoulder pads stick out more and there's a little more of a padded feel to the armor.  The arms are thicker, and it does feel more heavily armored than other clones, particularly the skinny 2012 variety.   Next to Phase II Rex, this guy feels like a tank!   I think kids will like it more than most collectors, but the extra gear actually does improve the toy for once.  It's a lot more fun than a firing rocket launcher which the figure can't actually hold, plus it'll  help kids from losing all their guns.   It's a well-thought-out release, and I like it a lot.

Collector's Notes:  This is the first-ever individually carded, non-exclusive Boss figure.  And it's a little hard to find at retail, but not impossible.  Get it if you can!  Given Boss' role in the show was merely a cameo, it's a miracle that even this one figure exists.

Don't assume anything. ARC Trooper Fives and Echo are no-brainer repaints, yet when asked, Hasbro said the chances of them being made are unlikely. The rest of Domino Squad in their training armor also seems doubtful.

I saw Boss and Nom Anor at one of those generic toy outlets that open temporarily in the malls (usually around Christmas, this one was early) just last week. They wanted twenty bucks a pop for them though which is a bit silly. That store is also the only place I've TF Prime Deadend so far, but he's not worth the twenty three bucks they were asking.