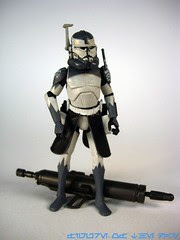 Bio: This warrior CLONE COMMANDER WOLFFE figure is rendered in careful detail to look just like the character in the Star Wars: The Clone Wars film! Arm him with his blasters for all the Star Wars adventures you can come up with, but he's an even greater threat to his battle droid opponents (other figures sold separately) with his firing rocket launcher! Reenact your favorite Star Wars battles or create brand new ones with this cool CLONE COMMANDER WOLFFE figure!   (Taken from the figure's Hasbro.com page.  From the film?  Really?)


Commentary: It's Clone Commander Wolffe, take 2!  This version has his newer armor, and reduced articulation.  He's built off the buck for the 2012 Captain Rex figure, which features ball-jointed shoulders and elbows, the ball-jointed neck, and swivel joints at the hips and waist.  So we're getting 8 points of articulation, which is a bit of a reduction, but it comes with enhanced deco and a thinner, more cartoon-accurate sculpt.   The removable helmet is sadly gone, but it's still a decent-looking figure and to be honest with you, I can do without the removable helmets.  I'm over that.

Wolffe's antenna differentiates him from Rex, as does his extensive deco.  Now much dirtier in appearance, the figure has Wolf Pack markings and all sorts of nifty grey details.   While Rex and Cody's colorful get-up expresses a little more hope and ties to the past, Wolffe's grim outlook to the future (and loss of his eye) almost foreshadow the nastiness of the Empire which is just around the corner.  He has no problems sitting or standing, and that sculpted helmet looks fantastic.  The helmet may have some visor slop, so be sure to examine the paint job carefully if you have the option to do so.   His twin pistols fit in his holsters, and overall this is a great-looking figure which falls short of his cheaper, more tricked-out ancestor.   Of course, if you want this particular outfit look, you'll probably want to get this one anyway.  I did, and I don't regret it in the slightest.

Collector's Notes: While tougher to find, the figure's higher price keeps the price... low?  eBay samples don't go for much more than retail, so the $9 figure might sell for $12.  I won't promise you'll get your money's worth on this one, but it is a distinctive figure and that helmet has yet to be used with any other Clone character.