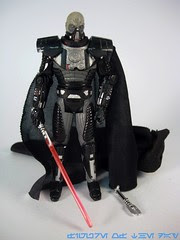 Commentary: With few A-grade movie characters left-- OK, technically none-- it's a good thing Hasbro is moving on to the video games.  While I haven't played The Old Republic, nor will I, I have to say that Darth Malgus is one fine looking action figure.  Big and imposing, the game's developers came up with a design that looks like an incomplete, but beefy, Darth Vader.  The articulation is pretty much normal with 14 joints, but check out the sculpt and deco. There's a lot of glossy elements, and some simulated "damage" on the shoulders.  OK, the damage looks crappy, but let's get by that and look at the gauntlets.  Each one has several individually-painted lights and switches, bringing his armor to life while his chest remains relatively simple.  The figure's bald, damaged head recalls Anakin Skywalker, while his breathing apparatus seems similar to Darth Vader.  Heck, even his black armor resembles Vader, and the double cape is a nice touch too.  By default, he has a cloth cape hanging off his back, but he has a hooded robe with some wire in it which you can pose for added Sith menace.

It's a neat and fairly well-executed figure, but difficult to find as is the case with most figures this year.  For $10-$20 it's a nice figure, but not really for $50.

Collector's Notes: While these figures did ship to stores, they sold through very quickly and retailers didn't get all that many.  They're de facto online exclusives for the time being, so if you want one you may be best off buying a case or splitting a case with a buddy, as individual figures have reportedly sold for north of $50 over the summer.  eBay usually has it at $20-$30, which is still obscene but it's not as bad as the reported prices at Celebration VI in Orlando.

My Target got a case on Friday with Mr. Malgus, INC, Hoth Luke, ANH Vader, CW realistic Ani and 7 TPM figures nobody wants. They're out there...

Just missed this guy the other day @ my local Wal-Mart! But was able to pick up Hoth Luke and a couple of INCs though, so yeah they are out there!

This design seems like it could have been something from RotS, if Anakin had not been given the classic Vader outfit right away...