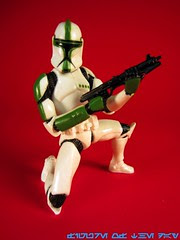 Bio:  Virtually indistinguishable from one another, Clone Troopers are identical in physical appearance, mental capability, and stamina. Part of a clone army, they are grown in the cloning facilities of Tipoca City, a luminescent city of industry emerging from the raging seas of Kamino. Although clone troopers share the same modified genetic code, their genetic structure has been altered to make them less independent than their genetic host, and their growth has been accelerated to twice the normal rate of a human. Grown and trained specifically for military combat, the Clone Army was mysteriously commissioned ten years earlier.   (Taken from the figure's packaging.)

Commentary: This Clone Trooper sergeant was a huge pain in the neck to find.  Because Hasbro is a cruel mistress, they released a deluxe 3-pack of posed soldier style Clone Troopers with limited decoration... and five variations sharing a single SKU.  Even if you ordered cases, and I did, you got pretty random figures which means you had to  be patient and/or resort to eBay.  I waited, never saw the green set, and had to go to eBay and thankfully prices "dropped" to about $10 by then.  Now they're cheaper.  So for all of you whippersnappers who say it's never been impossible to find figures on the pegs and everybody had it so much easier ten years ago, well, screw you.  There were always hard-to-get figures and I guarantee you I can name dozens of figures most fans saw 1 or 2 times tops, if that.   2003 had some real doozies, 2002 had a couple of iffy ones too.   2004-2006 were pretty great, though, I have to admit.

Anyway, this Clone Trooper has limited articulation, which is a diplomatic way of saying "this was an excellent small plastic statue."  I exaggerate, as the gun is molded to his hand and they do have limited arm, neck, and waist movement, but for ann practical purposes the picture is what you get.  These figures are wonderful diorama filler, the kneeling ones stand nicely and are easy to set up.  The standing ones, not so much.  I like putting this sculpt on my gunships, it's nicely designed and the deco is, or rather was, pretty good.  For some reason Gentle Giant decided the "green" was really a brownish color while Hasbro stuck with a bright green, and only now did Hasbro announce a figure with the brownish stripe deco for release in 2013.  Fans were asking for the brownish color-- including me, directly and through intermediaries during certain product developments-- but Hasbro insisted the green was greener on the action figure side.  Wookieepedia has a brown stock image, so I'm guessing that means this figure is technically (due to factual reasons) painted incorrectly.  It's still cool-- I'd buy Clones in this template with other color paint ranks all day long.  Make me an orange one with orange dots, I'll buy it.

I think this is where I give you some sort of shopping advice.  I'd suggest holding off until 2013 and getting the brownish one in The Legacy Collection, as it looks closer to the renders I've seen from the movies.  Of course, if you're like me and love wildly colored figures that may be incorrect, you've got no reason to skip this one-- it has the historical significance of being Hasbro's very first Clone Trooper sergeant action figure.  The next chronological green release, which I nagged a lot of people about during a sort of consulting period in 2004 before I got hired there, would be in the 2005 Entertainment Earth exclusive Clone Packs.   And after that... 2006?  If you like green you'll like this figure.  Great for St. Patty's Day.

Collector's Notes:  There are 5 versions of this set available.  One has 3 white troopers.  Another has 1 green figure.  Another has 1 blue figure.  Another has 1 yellow figure.  And another has 1 red figure.  I never saw yellow or green in the wild, and the yellow and green packs mix up the sculpts by replacing one with a new standing figure with binoculars.   If you're a loose collector, skip the all-white set as those figures repeat in the "color" sets.  Hasbro press photography showed a 3-pack with 3 colored troopers in it, this was never released which is why you won't find one for sale.   I found yellow and green to be the rare ones, but history neutered the secondary market of numerous "rare" Clone Trooper toys.