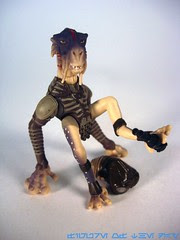 Commentary: The toys to tie in to the 2012 3D Phantom Menace release can best be described as low-budget.  Sebulba is one of the best repurposed figures, taking the release from 2000 and slapping on a fresh coat of paint which improves the figure nicely.   He has a helmet and a spanner, along with an improved, more subtle coloring.  The original had less paint on the head and a paler skin tone, despite being released quite some time after the movie hit theaters.  This release, coming over a decade later, has the luxury of having already paid off the tooling and new paint applications are almost a given.   It looks more like a creature than a figure, keeping a similar texture to the original release while ensuring the colors would fit in with other, more recent figures better.  Has has 5 points of articulation and has no problems interacting with his own accessories.   As a stand-alone thing, it's a nice figure.

In the context of the 2012 toy line, it's a flop.   In early 2012, Hasbro released Sebulba's Podracer as a non-exclusive vehicle sold pretty much everywhere toys were sold.  Sebulba was not included, and only sold in this pack which, while supposedly set to hit in January, saw little or no distribution until about April.  So you have this big $25 vehicle, which lacks a driver figure from the 1999 release, and its one and only driver is exclusive to a store which didn't even have it on time.  To make things worse, Sebulba in 1999 was a much smaller figure.  By 2000 Hasbro realized he needed to be bigger, so the 2012 Sebulba is far too large to fit in the vehicle without intense cramming.  Sure, you can make it fit, but I can make Barbie fit in a Batmobile with the right tools, too.  If you have to squeeze, twist, cram, and stuff a figure into the pilot seat, it's not a good fit.  This is not a good fit.

As most figure collectors seem to care the most about individually carded figures and give little thought to vehicle drivers, odds are you'll never have an issue with this one.  Maybe you won't buy it, or you'll leave it in the box.  As a plaything for kids, it only works as long as you never, ever get it near the vehicle sold as a companion piece to this figure.   As a year, 2012 was filled with a disappointment for every delight, and as this figure embodies both those qualities it really is a great metaphor for the line in its current state.  In short: kids will have problems, collectors may have problems, and the best way to enjoy the line is to ignore big parts of it.

Collector's Notes:  While this assortment of exclusives vanished pretty quickly (often through a quick clearance), samples still persist and have appeared on-shelf at Walmart as recently as last month.  A store near you may still have this set.  Variant collectors, those seeking unique repaints of figures they bought 10 years prior, will find a lot to like in this set and for the sum of its parts, it's a pretty good deal.  The main issue I have is figure/vehicle compatibility, which this line didn't struggle with so much as it ignored it entirely.   Hasbro would have been better served to repaint the "inferior" 1999 pack-in Sebulba from the Podracer, as at least it would easily fit without giving a fuss.    I realize some of you don't think this is an issue, but look at it this way: if Barbie were too fat for  her clothes, or if two LEGO pieces couldn't fit together, that would be a bad toy.  I would put a pilot that can't fit in its vehicle in a similar category, unless there were plans to make a Sebulba which fit, in which case this is just a turkey of a year for Star Wars in general.  And to be honest, it probably will be written as one if/when someone does a history of the line by year.