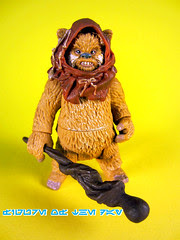 Bio: These two Ewoks take over an AT-ST walker during the Battle of Endor helping the Rebels in their fight to seize an Imperial bunker.  With their new friend Chewbacca, the Ewoks hijack the Imperial walker and toss one of the troopers out of the AT-ST while knocking the other trooper unconscious.   (Taken from the figure's packaging.)

Commentary: As much as Lucasfilm enjoys trying to gloss over continuity issues, the AT-ST hijackers in the movie and the action figure line have issues.  Widdle Warrick has never been made as an action figure in name before, but a Target-exclusive Wicket from 2007 is clearly meant to represent the character, as his companion Oochee is meant to look like Wunka.  Confused yet?  Basically what you need to know is that this is a "new enough" Ewok and the first-ever new mold Willy/Widdle with a new weapon and unique deco.  The same head was used for Flitchee this year, as well as the body on several other Ewoks.  It's the same 2007 body with 10 points of articulation, which looks great and is an ideal basis for building, well, every last Ewok which qualifies as an adult, really.

Deco is good and clean, with white fluffy cheeks and fur on his upper lip which, when decorated like this, doesn't look much like a moustache.  The figure's teeth and eyes don't look anywhere near as cute and cuddly as the Ewok from Return of the Jedi, but the coloring is on the mark and the hood may be slightly more to the tune of how it looked in the TV movies.  While unquestionably a better figure than the aforementioned Wicket in almost all regards, it could still use some improvements to make it more like either specific Widdle, although this is unlikely to happen.  I'd still say get it anwyay.  His staff/wand/whatever is new and unique to this set, which, with the uniquely colored (and hooded) figure makes for a worthwhile purchase.

Collector's Notes: DON'T PANIC!  Kmart exclusives are generally quite common and wind up on clearance, but are slow to roll out.  Also, Kmart's web site is notorious for filling orders with the wrong products.  I suggest being patient and/or networking here, as the numbers tell us Hasbro made a good number of these and they should be plentiful in the next few months.  I only just found these at retail yesterday and saw at least a full case's worth.   Don't overpay for these on eBay until the future!