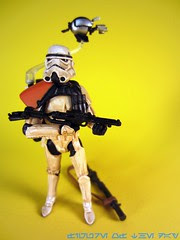 
Commentary: This Sandtrooper is one of few figures to get two good takes during the 2010-2012 Vintage line, and is easily the better of the two.  The sad thing about this is that this orange-pauldroned release is going to be much, much harder to get.   Based on the 2010 Sandtrooper, which itself was based on the Walmart-exclusive Dewback pack-in Sandtrooper, this is a pretty solid figure.  The helmet seems sharper this time around, but the 14 points of articulation including ball-jointed hips are about the same.  The most fascinating thing about the figure is its accessories, specifically the little sidekick droid from the Special Edition which may be plugged on his backpack, plus the new smaller blaster.  This time around, the stalk is actually articulated and is made of three moving pieces.  It's sort of like the original Kenner Three-Position Laser Rifle, a quasi-legendary vintage-era roleplay toy.   Seeing the basic form scaled down to 3 3/4-inch action figure size is pretty exciting, and along with the grenade launcher rifle, adds a lot of value to this otherwise similar figure.  Oh, and the dirt is important.  A little schmutz goes a long way, and the bleached-white armor can't hold a candle to the brown, muddy, and frankly sort of gross dusty redeco you see here.

The only place where one could argue this figure falls short, at least within reason, is possibly the lenses.  Prop replica makers are now saying the lenses should be green, which is counter to how I've always pictured the characters.   It's one of those strange details that it seems in the movies, comic art, paintings, and even 501st Legion costumes are left black.  I mean, black makes sense to me, so I would say  Hasbro's interpretation is more or less what I imagine with the armor.  It's one of those weird "Who are you going to believe, me or your own eyes?" details like Han's blue jacket on Hoth.   Were I designing the figure, I'd have done what Hasbro did here.  It's a nice figure and until we start seeing ball-jointed/bend-and-swivel wrists on Stormtroopers, I assume there will be little to no room to improve on this impressive (and hopefully re-releaseable) design.

Collector's Notes:  How many Sandtroopers is this noww?  We've gotta be scraping 15 or more.  This one, at press time, I haven't seen in stores but I have heard reports of this wave at a few big box stores.  Of course, you can order it online.  (I work for an online toy store.  When you say it doesn't count if it doesn't hit a store in your neighborhood?  That stings a little.)   This figure was available in three different configurations: on a "vintage" Star Wars 1978-style cardback, on a "vintage" "lost line" blue and black cardback, and also in a Comic-Con exclusive Carbonite Chamber box in the "lost line" packaging.  In short, the "lost line" one is unquestionably the most common unless this figure gets repackaged in a special remix wave, which at press time does not look likely.

I still don't understand why Hasbro has not made a correct sandtrooper even to now. The left knee and stomach are different than a standard stormtrooper. Gentle Giant has corrected this in the larger scale version.

There's a ton of minor (and admittedly major) details I'm assuming we're never going to see, like the knee. Also, green lenses in the helmet, which I didn't even realize was a thing until pretty recently.

I meant to say that it was Sideshow Collectables that made a proper 12' scale Sandtrooper, not Gentle Giant.