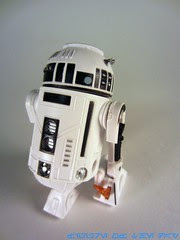 Commentary: If the R6 dome is the most adorable, then the R8-Series Astromech Droid is the oddest.  This version is cast in white plastic with black markings, and is said to come from the post-Return of the Jedi era of fiction, "seen" in books like Vision of the Future. Based on an illustration which I believe came from Star Wars Adventure Journal, this particular build uses a special repainted R7 body, black-marked white legs,  and of course the dome.  The dome is a bizarre creation in that it's meant to be an evolution of the Astromech design, but the lack of a central eye makes it seem more like a prototype.  If there wasn't already an R1 unit, I would assume this was the R1 unit as the panels and deco looks very 1970s It wouldn't stun me at all to see it in a junkheap somewhere in a Jawa's sandcrawler.

The dome's most notable feature is a sort of a dish on the top of his head, which could just as easily be a place for chips and dip.  There's also a tiny satellite dish off to the left-hand side of his head, which is how I assume it gets most of its visual information.  I would also like you to take note of a black box under the head, right at the top of the body.  In the original R8 illustrations, this is textured to look like a speaker.   This is, no doubt, a reference to some in-universe thing which makes Industrial Automaton droids sound like Apple products, in that Basic speech was listed as a "rumored feature" for these droids on an in-universe Wookieepedia entry.

To call this particular droid distinctive is something of an understatement.  It feels more like a throwback than an evolution forward, of course when you really drill down into droid naming it all starts to fall apart at The Clone Wars and the prequels.  Thanks for nothing, canon fiction!  I really dig this figure and the coloring is perfect, easily the best for this mold.  Be sure you get one.

Collector's Notes:  This item was a customizable release at Disney Hollywood Studios in Orlando, and you can configure them any way you wish.  I would consider the picture to  be the best possible build using the parts available today, but obviously you can do whatever you want.