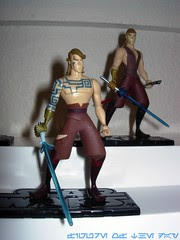 Commentary: As part of the last batch of cartoony figures, Anakin Skywalker replicates his look on Nelvaan quite nicely.  A somewhat clever reuse of the previously-released Yavin duel version, this Jedi-in-the-making five four points of articulation and is basically a cool-looking and cheap statue.  The outfit isn't unique to this figure, a "realistic" take on this costume came out in 2007 so you've got choices if you dig this outfit.   The leech marks (or tattoos) on his skin are nicely done, painted in blue and they match the animation model pretty nicely.  Torn robes and pants are present, as is the robotic fist of Ghost Hand.    There's no articulation below the waist, so as toys go, this isn't a good one.  It's a nice display piece or desk accessory, and since it's pretty cheap I'd say it's a worthwhile purchase.

Collector's Notes:  This set is cheap on eBay, so yeah, no excuses for skipping it unless you flat-out don't want it.  Which is weird, I never saw this set at retail and got mine at a comic shop at basically SRP.

Weren't these packs actually $10? I remember because even at the time I thought it was an amazing deal and bought doubles of all of them.