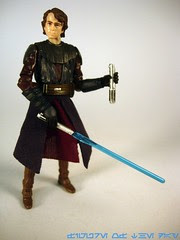 Commentary: I often kid that the best way to get a Star Wars fan to demand a product is to tell them they can't have one.  This Anakin Skywalker was born out of a concept that almost resulted in the 2008 cartoon line being entirely "realistic," Hasbro instead went for a hybrid design with more realistic human proportions but an ultimately animated sculpting style.  A prototype Anakin was sculpted in a "realistic" style, and this is sort of its descendant.  It's a good figure, and Hasbro said we'd probably be getting around one figure from the cartoons in this style per wave for a while now.

This figure is really well made, if there was a "Pawlus' Law of Action Figure Design" booklet I would wager he hits all the right marks.  Each wrist has bend-and-swivel articulation, and the cloth lower-half of the figure looks pretty good while allowing his legs to move freely for posing or vehicle piloting.   His sculpt is sharp, if you zoom in you may see all sorts of subtle creases and folds, particularly on the "vest" part of his chest.  The armor looks great, the gloves are top-notch, and I love the fact he can angle his wrists up and down for dueling or just pointing his weapon at people.  A holt is also included, and it's a nice touch.  The head sculpt has a lot of personality too, so overall it's a good figure.  But...

Collector's Notes: ...it's a crying shame that this, and most 2012 Vintage figures, remain hard to get.  This is one of the few that seems to turn up at retail (I've seen him a few times) and I just don't get why Hasbro doesn't take a mulligan on 2012 and repackage some of these guys next year.  You may still be able to get this figure, either online at fine sponsors like Entertainment Earth or if they're dumped somewhere.  Which I figure they have to be eventually, too few of these seem to have got out.