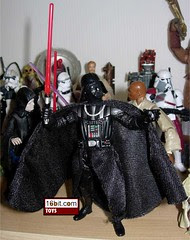 Bio: Giving up everyone and everything he cares about, Anakin falls to the dark side. Encased in the black armor that will come to strike fear throughout the galaxy, he is no longer Anakin Skywalker, he is now Darth Vader.   (Taken from the figure's cardback.)

Commentary: Surprisingly, the only basic Darth Vader figure released for the entire Revenge of the Sith line, and quite a popular one at that.   This figure was designed well, and as such, can be used for a variety of purposes.   His cloth capes allow him to sit easily in any vehicle, from a Jedi Starfighter to the Darth Vader's TIE Advanced X1.   His unique left hand is posed so, with the help of a display stand, he can easy choke another figure like Captain Antilles.  This figure was designed specifically based on the unique armor as seen in Revenge of the Sith, but it'll work well in a variety of display (and play) scenarios.

Collector's Notes: This exact figure was rereleased in 2006 as part of the very wordy Star Wars Episode III Heroes & Villains Collection.   While no changes to the figure were made, the packaging resembles the 2006 Saga Collection and it includes one of six random blue bonus holographic figures.   To date, no known significant variations exist of this particular figure.

Revisited 01/06/2013: In 2007, the figure was repackaged yet again with a 30th Anniversary Collection coin collecting album.   This figure had been repackaged a few times, rendering it pretty much worthless.  This is good news! The figure fits well into most vehicles, stands nicely, and looks good.  As I write this, Amazon has the 2005 release for under $1.  Get while the getting is good!