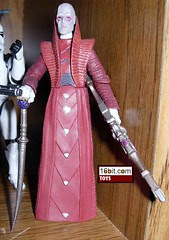 
Bio: Tion Medon is the local administrator on the remote sanctuary of Utapau, a planet pitted with enormous sinkholes. He meets Obi-Wan Kenobi, who has arrived in search of the droid army leader, General Grievous. (Taken from the figure's cardback.)

Commentary: A "helpful alien" played by actor Bruce Spence hit the rumor mills back when Revenge of the Sith was just "Episode III" to us all and we had huge hopes. Even when we heard the name Tion Medon leak, we had huge hopes, bolstered when we saw the figure show up in the Sneak Preview wave. And what were we left with? Another minute-at-best cameo, but a neat one! The vampire-like leader on Utapau has a cane (cool!) and a big gun (cool?) as well as multiple points of articulation to allow you to display him standing with his arms out, or his arms out, standing, but with the arms in a different position. This statue-like alien has a great sculpt, top-notch paint, and an easily-lost-if-you're-not-careful cane. With lots of folds and detail work, this is a fine figure with good craftsmanship behind him, although the character's screen time may not be enough to convince you to buy it if you aren't a card-carrying member of the "One of Every Figure Club," of which, I assume, I'm a charter member.

Collector's Notes: Packed in a very easy to find assortment, and shortpacked to boot, this figure was not hard to get. Actually, he was still available months into the regular line's run, while figures like Grievous, the Wookiee Warrior, and R4-G9 had long since sold out. Tion Medon is a fun alien design, and a neat addition if you like the look. If not, he's nothing special-- since he doesn't do anything, his legacy will be as a collectible that nobody seemed to want. I dig him, though, and even though his pre-release mystique will always be what makes this figure fun, it's not like you shouldn't give him a look if you get a chance to get one on the cheap.

Email ThisBlogThis!Share to TwitterShare to FacebookShare to Pinterest
Labels: Revenge of the Sith, ROTS, Utapau