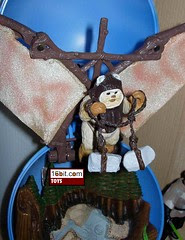 
Bio: The Endor star system was long thought to be an insignificant, removed cluster with few planets and no major travel routes. For that reason, it was considered the ideal construction site for the second Death Star battle station and in turn became the location of the Galactic Civil War's final battle. The Battle of Endor resulted in the destruction of the Death Star, the slaying of Emperor Palpatine, and the scattering of the Imperial fleet.

Endor's moon (Sanctuary Moon) is home to vast forests of giant trees, many predator species and the tribal Ewoks. The tree-dwelling Ewoks are curious creatures; they stand about one meter tall, rely on primitive spears and bows for hunting, and dwell in village clusters built high within the forest's giant trees. Their understanding of forest survival skills are extremely advanced and came in quite useful during the Battle of Endor where they helped a Rebel strike force destroy the Death Star's force field generator. (Taken from the toy's box.)

Image: Taken inside its planet Endor globe, which was included with the figure.

Commentary: Hasbro's love for this mold knows no end, and variations on it have been used for several ewoks, like this unnamed little fellow. Based largely on the sculpt for 1998's Wicket action figure, Ewok has a new head with a molded hood and a revised torso with a harness and a hole for plugging into the glider. As the figure is meant to be part of the Complete Galaxy display, it performs very admirably and looks excellent on a shelf or desk as a collectible. As a toy, it's a bit of a turkey. The figure itself is largely unremarkable, but it is a new character and another addition to the too-small selection of Ewoks made in the modern action figure line. It's cute, it's fuzzy, and we like it. No doubt, you will too, as his co-sell, a globe of Endor's Sanctuary Moon, is filled with geographic tidbits including points of significance from the two live-action Ewok movies!

Collector's Notes: While one of too many nameless figures, this little guy is a must-have for all lovers of Endor toys. I mean, look at him. (Tubby little guy.) Most collectors was their hands in Ewoks, but their number is quite small-- in the modern line, there's Wicket, Logray, Teebo, Paploo, Ewok (Complete Galaxy), Ewok (with Ultra Glider), and that's about it, with Cheif Chirpa coming along in a few months. With only two new characters of the Ewok tribe in the modern line, this is a figure that's worth snagging as anybody can tell you, there just aren't enough action figures made from Return of the Jedi.

The many nods to The Ewok Adventure and Ewoks: Battle for Endor are a most welcome fanwank, as the likes of the Gorax will likely never be seen in plastic in any other form. We hope, though, someday to see many more Ewoks from the three movies starring the furballs as well as the cartoons.

Email ThisBlogThis!Share to TwitterShare to FacebookShare to Pinterest
Labels: Ewoks, POTF2, Return of the Jedi