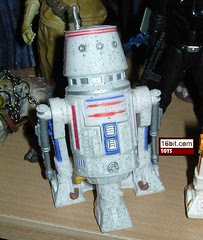 
Bio: R5-D4 was a part of the low cost Industrial Automaton R5 line, a line plagued with malfunctions. As a result, R5-D4 was owned by many beings and in a constant state of used sale. His programming became jealous of other droids that were capable of serving without failure and had loyal masters. (Stolen from Wookieepedia.)

Commentary: Thousands of years ago back in 1996, Hasbro (then Kenner) passed around a price list with three figures that never made it out that year: Darth Vader with Removable Helmet (released in 1998), Attack C-3PO (according to Hasbro employees, essentially C-3PX from the comics), and Attack R2-D2. It is widely believed but has never been 100% proven, although employee comments seem to indicate what R2-D2 was to have been was eventually rolled up in this unique, completely whack-ass crazy action figure of R5-D4.

This figure has a few moving parts, but really only one meaningful point of articulation. Both legs are joined at the "shoulders," and cannot be moved independently of one another. This is the only Astromech droid to suffer this ailment, which can cause the legs to "warp" and skew in one direction. The guns on his "shoulders" are also articulated, but really don't do much other than confuse-- why does R5-D4 need giant guns? Also, he splits down the middle to showcase a spring-loaded firing yellow rocket. While many fans pretended R2-D2 or R5-D4 was a toy cannon in their childhood, it's doubtful that any actually expected a droid to perform that function. Well, Kenner decided there was potential for a good toy here, and while fun, fans would spend the next 10 years asking for a new, improved version. With the new version in stores now as part of The Saga Collection, this figure is little more than a mere curiosity and no longer the one and only R5-D4 in the modern toy line-- and for many, skippable.

Collector's Notes: This figure had more variations back in 1996 than any other between warning labels, red card versus green card, holo sticker vs. no holo sticker, a resculpted yellow trigger to launch the rocket, and so forth. A fan with every R5-D4 variant would be taking up close to an entire case worth of figures-- sad, but true. For those who open their toys, though, only two notable versions exist: a straight button, and a more or less L-shaped one. For fans of bad, funny, or just plain weird Star Wars toys, you can get this one for as little as $1-$2 on eBay before shipping. It's a fun toy, but just so wildly out of proportion and generally out of whack with the rest of the line that a lot of people will, no doubt, choose to pass on this one.