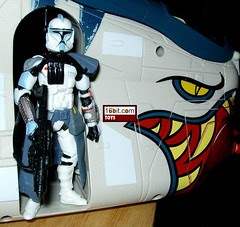 
Bio: The ultimate supercommandos, the ARC (Advanced Recon Commando) troopers are clones who were personally trained by Jango Fett. Only a select number of ARC troopers were bred and trained before Jango's untimely demise at the Battle of Geonosis. Activated shortly after the start of the Clone Wars, ARC troopers are used for only the most dangerous missions in which a substantial amount of independent thought and iniative is required. They are equipped with highly advanced clone trooper armor and formidable heavy weaponry. Whether they are fighting on their own or at the side of the Jedi, the ARC troopers are a symbol of the Republic's military superiority over the droid armies of the Confederacy. (Taken from the figure's cardback.)

Image: Taken inside the 2006 Clone Wars Republic Gunship. Because it's awesome.

Commentary: While initially a head-scratcher, this figure's neat-factor increased several times after its appearance on Cartoon Network's Clone Wars animated series, which showed these guys as the absolute coolest things to happen to Star Wars since Han Solo. From a design standpoint, Hasbro integrated elements of Jango's armor as well as that of the existing Clone Troopers, in addition to inspiration from the original trilogy's vast array of Imperial troopers. The Stormtrooper's forearm armor is painted silver and repurposes on the ARC's right arm, the waistcoat is a nod to the Snowtrooper, bits and pieces of the body and leg armor are vaguely similar to the Scout Troopers, and the shoulder pauldron is, of course, a nod to the Sandtrooper. It's many homages in one figure.

As a figure, it's good, but not great. Released a couple of months before the super-popular super-articulated Clone Trooper, this figure had the typical six points of articulation and ball-jointed shoulders, as well as fairly worthless swivel joints above the elbow. Its bizarre gun was difficult to hold and the figure tends to look a little wonky holding it, although it still looks pretty slick. The figure has an incorrectly painted stripe down the front face of the helmet, as it does not run down the forehead of the figure as it does in the cartoons and elsewhere.

Collector's Notes: This figure was available several ways. Aside from the regular release, there was a red repaint, and a Wal-Mart bonus pack that included a bonus action figure of a plain white Clone Trooper. In 2006, a cartoon-colored repaint of this figure is coming as a Toys "R" Us exclusive and will likely make this one obsolete in the eyes of many fans. Still, it's a nice figure to look at even if it's not much of a toy and was very popular in 2003 upon its release. If you only add a few non-movie figures to your collection, the ARC Trooper should be near the top of your list because the likes of Alpha from the comics and the various troopers on the TV show are worthy toys to own.

It's also worth noting two flaws of this figure. One, the rangefinder falls out of his head at the drop of a hat, so be careful when handling yours. Also, the figure-- like many from 2002-2003-- has been known to have a yellow-green residue grow on packaged and loose samples for reasons as of yet unknown. The color can, in most cases, be wiped off, although a packaged figure that looks like it's "yellowing" can't be corrected without opening the packaging, thus ruining the mint-on-cardishness of it.