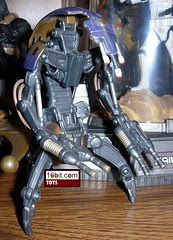 Image: More delightful adventures in the home of Adam Pawlus.

Commentary: With Episode I, the line was a delight in the sense that each and every new figure was a brand new sculpt for a very long time. The downside was that several figures were designed and complete nearly a year before the movie came out, resulting in some quasi-authentic designs such as the Destroyer Droid. With articulation at the neck, shoulders, elbows, hips, and ankles and a bendable midsection, many fans speculated this meant a transforming version would come out that could turn into a wheel. (This never happened.) The figure itself is quite good and one of the better Destroyer Droid figures except for the head, which has its eyes in a configuration quite different than what was seen on-screen. If you only buy one Destroyer Droid, this may be one of the best.

Collector's Notes: As one of many versions of the "Droideka" figure, this was one of the best. Durable, sturdy, nicely articulated, and devoid of unsightly action features, it may be the best were it not for a few inauthentic points in the sculpting. The exploding version was nearly equally as good, although the missile-firing ones form AOTC and ROTS were not quite as nifty, although some ultra-cheap versions were made for the Clone Wars line that were surprisingly good for their cost. This figure also includes a stand, and has no feet with which to use it.

Email ThisBlogThis!Share to TwitterShare to FacebookShare to Pinterest
Labels: EP1, The Phantom Menace