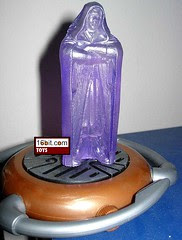 Bio: Darth Maul was a Dark Lord of the Sith and the first known apprentice of Darth Sidious. Maul was kidnapped by Sidious and trained in the ways of the dark side of the Force from a young age. He revealed himself to the Galaxy on Tatooine and killed Qui-Gon Jinn on Naboo before being killed by Obi-Wan Kenobi. (Stolen from Wookieepedia.)

Image: This image was taken on a table of no real consequence, other than it cost less than the figure standing on it. Hooray for Target clearance furniture.

Commentary: Hasbro's fetish for holographic figures started here as Wal-Mart exclusives. Along with a companion Qui-Gon figure, Darth Maul had no articulation and could do nothing aside from standing there and, when a light source came from under him, lit up. That's it. As such, adding this figure to your collection will probably stem from your love of Darth Maul or your need to collect-them-all, because as a toy, there's really nothing here. As an added bonus, this acts as a quasi-roleplay toy because the projector (while large) is about the size of a communicator a character in the movie might carry. It's a neat item and worth picking up as a collector's item or even as a toy for kids-- heck, it's a little surprising this wasn't pushed as more of a roleplay item in which you could "Communicate with your Sith Apprentice!" or some such. But, such is life, and this item can only loosely be referred to as an "action figure" as there's pretty much no action here.

Collector's Notes: While fans keep requesting Hasbro "finally make a Darth Maul holograph," it's important to point out that they did, and this feature is dedicated to the ignorant few who seem to really want something but can't be bothered to search on Google to confirm that not only did it come out, but it's largely worthless. It can be easily had for retail price, and with a little patience, even less. I personally bought several at $0.50 a whack on clearance as this was an item that redefined "unpopular" in many-- but not all-- markets.