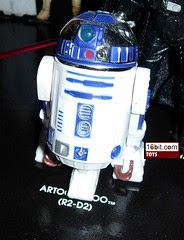 
Bio: R2-D2 (also R2 for short; pronounced Artoo-Detoo or Artoo) was an astromech droid, the most famous unit of the R2 series, and long time counterpart of Protocol droid C-3PO. Along with his resourcefulness, R2 had many tool-tipped appendages that allowed him to be a great starship mechanic and computer interface specialist. A bold droid, R2 would often enter dangerous situations without second thought. This adventurous streak saved the day on numerous occasions, often turning the tide of galactic history. (Stolen from Wookieepedia.)

Image: This image was taken against the background of the Early Bird Display Stage that was purchased at Wal-Mart as part of the certificate package. The figures (R2, Luke, Leia, and Chewbacca) came by mail a few months after sending off for them. (Yes, it's washed out. Sue me.)

Commentary: Hasbro rarely goes a year without reintroducing a new version of R2-D2, and in the case of this figure, the same mold was repurposed 3 times in an 18-month period, this being, arguably, the weakest of them. With no accessories and a non-removable gadget panel, the figure is essentially "what you see is what you get." While it has an excellent sculpt, and articulation at the arms and ankles as well as the dome, the removable third leg isn't much of an action feature. When you twist his dome, his sensorscope goes up and down, just like on other, similar R2-D2 action figures. As this figure is missing things which make his siblings more interesting, this is not the best version of R2-D2, or even the best version of this particular sculpt of R2-D2. It's by no means bad, but if you just want one R2-D2, this isn't it.

Collector's Notes: The most striking thing about this R2-D2 is that it isn't the one Hasbro said it would be. Originally, Hasbro showed the R2-D2 (Naboo) figure from 2000 as being part of this set, even in our own photo gallery of the hardcopies, we show this original figure instead. The final version is arguably better and truer to the film designs, but, as stated above, an overall inferior figure. In 2004, this mold was released with a removable access panel and additional gadget arms which plug into the figure as part of the Vintage Original Trilogy Collection. In 2006, this figure was issued again, with the panel still glued shut but with added accessories for travel as well as a display base and new "snow" dirt deco paint. Either of these figures are more interesting than this one, but this is by no means a bad figure-- it's just weaker than his brothers.