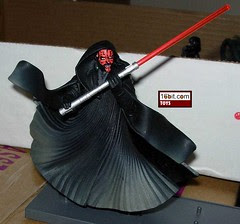 
Bio: After enduring heavy damage during their escape from Naboo, the Naboo Royal Starship is forced to land on the desert planet of Tatooine. Returning from Mos Espa with Anakin Skywalker, Qui-Gon is ambushed by a figure in flowing dark robes - it is the evil Darth Maul. Ordering Anakin to the ship, Qui-Gon matches his awesome Jedi skill against the Sith Lord's sinister power. Both escape with their lives, but it would not be their last meeting. (Taken from the toy's packaging.)

Image: Atop some cardboard boxes. Uh, on Coruscant. Yeah, that's the ticket.

Commentary: As arguably the most popular new character of the prequel trilogy, Darth Maul got a shockingly large number of action figures. What's even more shocking is that even Boba Fett, who has has had many movie and TV appearances since 1999, doesn't even come close. This figure was included in a 3-pack along with another Qui-Gon and another Anakin, however this Darth Maul was special. Released 3 years before Unleashed figures hit stores, this figure has an amazing, statuesque pose and looks more like a tiny sculpture or statue than an action figure. Which is for the best, as at that point, there was no other real direction to take a Maul toy. With most points of articulation marred by his massive robes, this figure looks incredible, has a dynamite face sculpt, and I believe is the Maul to end all Mauls. If you want one, and only one, this is probably the best looking in the entire line. He isn't much of a toy, but he is certainly incredible to look at.

Collector's Notes: Like the vast majority of Episode I product, this set can be had cheaply. How cheaply? You can usually get it in a small collection of toys, all boxed, for less than this three-pack's original retail price. It's sad, really. The Anakin is good, but not great, and the Qui-Gon is notable as it's the only Qui-Gon Jinn figure that included a plastic desert poncho. But the point here is to get you big on Maul: just look at that face. The face tattoos are bright, the teeth are gnarly, and the pose is as good as it gets. Even if you throw out the other two figures, this Darth Maul is worth the price of admission. Seeing as it was released in 1999, before scanning and today's super-articulation and whatnot, the figure is even more impressive.