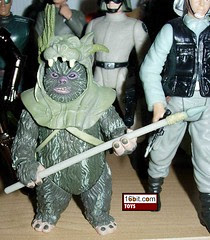 Bio: Teebo is an Ewok poet, musician and mystic who reads the future in the stars and communicates with nature. He's a member of the tribe's Council of Elders and led the war party that discovered Han Solo, Luke Skywalker and the others before the Battle of Endor. (Taken from the figure's cardback. Both versions share the same bio.)

Commentary: In the modern line, Hasbro has been stingy with the Ewoks-- Teebo here is one of very, very few "new" new sculpt Ewoks since 1998 as most were based on the 1998 Wicket sculpt. With jointed wrists, a lot of fine detailing, and a fair amount of movie authenticity (which the vintage one lacked), the new Teebo is really something to behold! He's fun, he's cute, he's vaguely cuddly, what's not to love? The little guy has no trouble standing, or holding his spear. Much like the vintage figure from 1984, he delivers, and is fairly well made. I say "fairly" because his wrists do tend to pop out of their sockets easily, so if you ever wanted to re-enact the Dooku/Anakin duel from The Invisible Hand but with an Ewok in the Dooku role, this is the figure for you. As Return of the Jedi is, was, and always shall be my favorite movie from which to get toys, Teebo comes with extra praise.

(Admit it, even if you weren't a fan of the plot, you gotta love the Jedi toys. Just think of it all! Imperial Shuttles, Speeder Bikes, A-Wings, B-Wings, Nien Nunb, Admiral Ackbar, Jabba the Hutt, Ewoks galore, a frozen Han Solo, Boushh Leia, Jedi Luke... I could go on. If anyone out there has arguments on the superiority of any other Star Wars movie's toy offerings, I'd be keen to hear them.)

Collector's Notes: Teebo was available on two unique cadbacks: Power of the Jedi (green) and the Saga Collection 2002 (blue). While I personally saw more of the green version, your mileage may vary. The green version can be had fairly cheaply on the secondary market, and for the "loose" collector, the figures are identical for all intents and purposes. No new accessories or altered sculpts here, this is just a good old fashioned repackaging-- just the way we like it. In other words, unless you collect carded variants, just pick one of the two, tear it open, and move on.

Email ThisBlogThis!Share to TwitterShare to FacebookShare to Pinterest
Labels: Ewoks, POTJ, Return of the Jedi, Saga