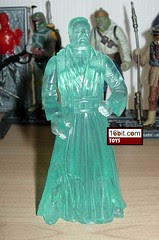 Bio: Obi-Wan "Ben" Kenobi was a legendary human Jedi Master who was trained by Masters Yoda and Qui-Gon Jinn, and who taught both Anakin and Luke Skywalker in the ways of the Force, and a General for the Galactic Republic in the Clone Wars.   He is also notable for having been the first Jedi in approximately 1,000 years to kill a Sith, one of the last members of the Jedi High Council, and one of the few Jedi to survive the Great Jedi Purge.  (Stolen from the article Obi-Wan Kenobi at Wookieepedia.)

Commentary: The first-ever clear holographic/spirit figure, and the first (and to date, only) mail-in figure from Frito-Lay.  With articulation at the head and arms, the figure arrived quite stiff and many collectors were concerned about damaging the figure.   While not much of a toy, the figure was the source of limited excitement upon its release due to the incredibly high fan interest in mail-in offers.

Collector's Notes: Released with no weapons, numerous collectors spent vast energies complaining about the lack of a lightsaber which, obviously, was never used by Kenobi after he joined the Force.  Also, a similar figure was released in 1998 as part of the Jedi Spirits Cinema Scene, which also included a resculpted version of this figure with painted highlights as well as companion figures Yoda and Anakin Skywalker.

Packaged in a white mailer box, which was packaged in a larger envelope, the figure came with 1 of 5 bonus offer coupons, including 2 "exclusive" products.   Three dollars-off coupons were largely ignored, but very strong interest in the B'Omarr Monk figure offer and the Cantina diorama coupon resulted in brisk trading on some collector forums.

Revisited 01/06/2013: The figure is arguably cheaper now than when it was issued, as samples on eBay are $3 or less, requiring no potato chip purchase.  It's still a neat figure, although it's clearly one of its time.  Hundreds of thousands of these likely exist.  In the UK, they were an individually-numbered HMV-exclusive premium item, and one sample on eBay was 35,709. It was estimated that in the 1990s, most Kenner figures were made to the tune of 200,000-250,000 but, obviously, this was never confirmed.

Email ThisBlogThis!Share to TwitterShare to FacebookShare to Pinterest
Labels: Exclusive, Jedi Knights, Obi-Wan Kenobi, POTF2, Return of the Jedi, The Empire Strikes Back