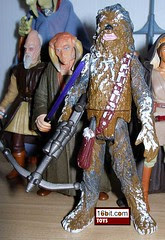 Bio: Chewbacca, like all members of the Wookiee species, was indigenous to the jungle planet of Kashyyyk.  Honorable, intelligent, and friendly, though fierce and dangerous when angered, Wookiees were a proud species who once made contributions to the Galactic Republic.  Wookiee senators represented Kashyyyk in the Galactic Senate.   Their respectable position changed, however, when the Imperials seized power and began enslaving the extraordinarily strong Wookiees as laborers. In Chewbacca's case, he escaped slavery and death with the help of a young officer by the name of Han Solo, who destroyed his military career to save the innocent Wookiee.  A life debt was established, and Chewbacca joined Han in his adventures through the galaxy.  Later on, the duo played significant roles in the Rebel victory over the Empire and the Wookiee species was restored to its position of honor in the galaxy.   (Taken from the figure's cardback.)

Commentary: One of the first 9 figures released under the Hasbro banner, this figure was a sign of things to come-- namely, very specific figures and a whole mess of core character retreads that many fans found dull.   Figures from this wave earned a lot of less-than-friendly nicknames from fans, such as "Crack Pipe Yoda" and in this case, "Money Shot Chewbacca," a term which we will not explain here as this is, in theory, a family column.  The figure has 6 joints, 5 of which are meaningful, and is sculpted to give you an accurate impression of the few seconds in The Empire Strikes Back in which he and Han blast the Probe Droid.   Sculpted with chunks of snow in his fur, this figure was also one of the first figures to have obviously missed paint operations.  This resulted in unpainted brown clumps of a  mushy substance on his backside, leading many collectors to pick this as the butt of numerous jokes.

Collector's Notes: While never rereleased, this figure sold reasonably well upon its debut.   Based on the first major redesign of the character as a toy, this figure was a move in the direction closer to movie accuracy, and away from the original 1995 sculpt that was sometimes referred to as "Planet of the Apes Chewie."   This "new" sculpt debuted in 1998 with Chewbacca (Boushh's Bounty) and was largely improved in the Chewbacca figure packaged with the Mynock Hunt Cinema Scene 3-pack.

An all-new Hoth Chewbacca was created in 2003 as part of an exclusive multi-pack for Toys "R" Us, which ultimately leaves Hoth Chewbacca in the cold as far as many collectors are concerned.   Hardly essential, this figure is worth a look if you think brown clumps are funny or you're aiming to "collect them all."

Revisited 01/06/2013: Still funny!  The figure concept has been revised numerous times with painted snow, rather than the funny and disgusting clumps of this release.  It's a comical, weird, and therefore good collectible.  The price seems to be around $4 on eBay individually, but any collector can tell you that if you buy him as part of a "lot" it's cheaper.  You can get him and several other figures for $5-$10, and you should.

Email ThisBlogThis!Share to TwitterShare to FacebookShare to Pinterest
Labels: Chewbacca, POTF2, The Empire Strikes Back, Wookiees