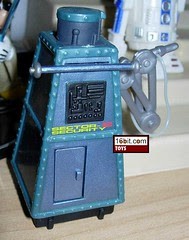 Bio: Employed by the Star Tours Travel Agency, the droid DL-X2's duties are rarely disclosed to the public, although it is known that this boxlike automaton serves a function in security. (Adam Pawlus)

Commentary: While initially rumored to be a line largely populated by astromech and protocol droid repaints, Hasbro surprised many by making numerous all-new sculpts for Star Tours which, upon observation, were actually less exciting than repaints. DL-X2 is little more than a box with an arm, which has one joint and (on my sample) a non-functioning door. Actually, we have yet to hear of one that does open despite its appearance. What you see is very much what you get-- there's no wheels, no face, and really no action to speak of. This item is little more than a prop, an accessory to another larger, better figure. As such, it's not one we can advise you to purchase for $10 (or the current market rate) because, in all honesty, it looks and feels like a freebie. As a collector of droids, though, it's a must buy. It's also quite interesting as an oddity, being one of like 4 (so far) action figures to feature Roman characters printed on it, in this case, "Sector 2 Security." A fifth figure with English text, the 501st Stormtrooper, is slated to be a Summer convention exclusive.

Collector's Notes: While ordinarily I would delve in the backstory or the context in which the figure exists, the book on Star Tours has yet to be written. The backstory of the ride went unexamined, and as such, the personalities of the droids aren't exactly known, nor are all their reasons for coming into being. It's an amusing... box. It's hardly essential, and like much of the Star Tours line, is an Expanded Universe figure that seems to be largely ignored by collectors.