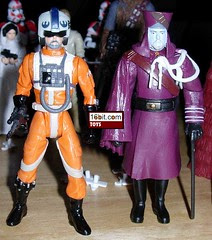 Bio: This influential Wroonian guild baron has earned fame throughout the Republic for his vastly popular holodramas.  He is also rumored to have an information network that rials the Bothans.   (Taken from the figure's box.)

Image: Posed carefully atop a TV tray next to Jorg Sacul as you'll no doubt wish to compare the two.

Commentary: When rumored that George Lucas would make an appearance in Revenge of the Sith after trying some of Willy Wonka's gum, fans were hoping for an action figure.   Wasting no time, Hasbro and the Fan Club delivered this figure in a box set-- but for the purposes of this feature, we're only going to be looking at one figure today.

Posed to look pretty much exactly like every publicity still we've seen, the figure takes few risks and doesn't disappoint.   For every fan that likes silly hats, this may be one of the best figures you can buy.  Articulated at the shoulders, elbows, waist, wrists, and neck, he can assume a few poses but not too many due to his cape blocking movement.   His cane is made of a stiffer-than-usual plastic making it seem like it was made by toymakers who remember how to make great toys.   In terms of materials, this feels largely like a quality figure.  The face design doesn't quite match some of the images we've seen, with the red markings on the face being rendered nearly invisible on both samples we've inspected.  Harumph.   The figure itself can't do much other than stand, but as a figure explicitly designed for collectors, it delivers what it should.

Collector's Notes: While George Lucas has been hesitant to make a "George Lucas: The Director" figure, he's been a little more liberal about lending his likeness to toys as of late.   The first figure to carry his likeness was Jorg Sacul in 2002, which had the same name as a passenger being paged in Star Tours.   Baron Papanoida is the first of two Lucas figures in 2006, the second being the mail-in George Lucas in Stormtrooper Disguise action figure.   A minor character, this isn't a figure you might feel is "missing" if you skip it, but as it's a director cameo figure, it's hard not to recommend picking up as it's just such a fun-- if somewhat silly-- design.

The cane itself has an easter egg-- if you look at the "knob" part, it's quite obviously the Death Star from the original Star Wars film.   We're not sure if its a nod to his "information network" or just a cute in-joke, but we're sure someone out there has decided this is a major plot point and important aspect of the mythos and has a 32-page fanfic to tell you about.

Also, this figure is listed as a "Wroonian."   Which, frankly, is a new race to me.   Apparently there's Wroonian Twi'leks as well, as Chi Eekway has been listed as both.   I guess if Gran can represent tons of planets, Wroona can support numerous species, too.

Revisited 01/06/2013: This set had a big price drop as this Fan Club exclusive tanked, hard.  You should have no problems getting it for around $15 shipped.  It's worth that, easily.  The character itself - and this entire set - has gone through some retconning, as his species is now "Pantoran" and the entire Revenge of the Sith-era backstory for this boxed set is pretty much null and void as a result of his appearance in The Clone Wars in the season 3 episode "Sphere of Influence."  While I really dug the figure at the time, I've since soured on it a bit.  I think I prefer Jorg Sacul as my George Lucas-as-action-figure.