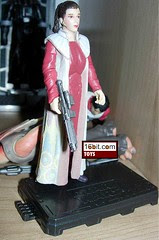 
Bio: The Rebel heroes Princess Leia, Han Solo and Chewbacca think they are safe in the company of Han's old friend Lando Calrissian, who is now Baron Administrator of Cloud City. They have no reason to expect trouble as they enter the dining room. But they discover that they have been betrayed to the Imperial forces, when they come face to face with the evil Darth Vader. (Taken from the figure's cardback>.)

Commentary: As one of only 7 newly sculpted figures in the popular Original Trilogy Collection, this figure gets surprisingly little attention. Shipped with an oddly painted face and very few meaningful points of articulation, this was a highly-requested figure that, with a slightly better face paint job, would have been a stellar figure. Named simply "Princess Leia" (her vintage counterpart was "Princess Leia [Bespin Gown]"), this figure is a good addition to any collection and one of too-few figures made from The Empire Strikes Back. While we wouldn't call this required purchasing due to its limited appearance in the movies, a good Leia is hard to find and this is a figure that's easy to advise picking up.

Collector's Notes: Aside from the vintage figure, a "soft goods" version of this figure was released in a two-pack with Han Solo as part of the "Princess Leia Collection" in 1998. Much taller and with less articulation, that version of the figure was largely ignored by fans who wanted a "real" version of the figure. It took 6 years, but here she is, with all her display base and Imperial blaster glory. Neither expensive nor hard to find, she's a figure worthy of picking up-- if you like Cloud City, and if you dare call yourself a fan, you no doubt do.

Email ThisBlogThis!Share to TwitterShare to FacebookShare to Pinterest
Labels: OTC, Princess Leia, The Empire Strikes Back