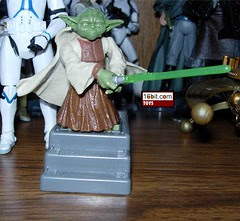 Bio: Yoda suspects that Palpatine is behind the evil events that are destroying the Republic. On Coruscant, Yoda and the Emperor meet in the ultimate confrontation between the galaxy's most powerful masters of the Force. (Taken from the figure's cardback.)

Image: Taken from yet another shelf location.

Commentary: For a character with virtually no outfit changes, Yoda has received a ton of action figures as of late. As one of few with an action feature, this particular figure has a nifty spinning attack which is really the figure's selling point. With articulation at the neck, shoulders, right wrist, and waist, he's not quite a statue, but he isn't terribly poseable nor is he the best sculpt of Yoda from Episode III on the market. Since he was created as-- *gasp*-- a toy over a collector's figure, those not wanting each and every Yoda ever made can easily pass on this one. Those seeking a toy, though, might enjoy having Yoda fly off his little base into a crowd of Clone Troopers or into a Sith Lord like Count Dooku or Emperor Palpatine. He doesn't look half bad on a shelf, either, as his mechanism is deployed by a really cool display stand.

Collector's Notes: While Yoda is an essential character to every collection, this particular figure is not. Easily had for less than its initial cost on the secondary market, this figure was surprisingly popular during the film's release due to it being purchased by kids, casual fans, and gift-givers, proving that collectors do not necessarily make or break a figure's success in the marketplace. (Although as far as the secondary market goes, that is another story.) Since this Yoda has everything a toy Yoda needs, you can do worse, but he does tend to look best in his packaging with his fairly nifty pose.