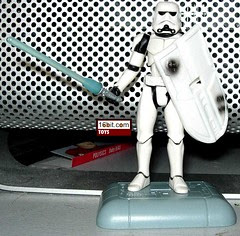 
Bio: The Stormtrooper is based on conceptual art from A New Hope, depicting the Empire's shock troopers in a corridor of the Death Star as they hunt down the escaping Luke, Han, Chewbacca and Princess Leia. While Stormtroopers were armed with blaster pistols or blaster rifles in the movie, this Imperial soldier is unusual because he holds a lightsaber, the weapon of the Jedi Knights. (Taken from the figure's cardback.)

Image: Pictured on Adam Pawlus' computer desk in front of the G5.

Commentary: For years, fans have been begging for concept-based figures and Hasbro delivers every now and again. With special versions of Darth Maul, Qui-Gon Jinn, and Obi-Wan Kenobi having been produced, very few trilogy designs have made the transition to plastic that this Stormtrooper has undergone. A Cloud Car Pilot, an "Airspeeder" pilot, and a Rebel "Biker Scout," of sorts, have been done as well as a few "removed from the movie" type figures, but this one is unique in that it's based on a well-known and much beloved concept painting from the legendary Ralph McQuarrie.

With 8 points of articulation (basic 6 plus swivel elbows), this figure can move pretty nicely. His gun fits in his holster, his shield clips on his arm, and the lightsaber can be held with no problems in either hand. It's really quite shocking as fans generally have something to complain about with a figure, but in this case, as a toy, it performs every toy-etic function perfectly. He can even sit down unrestricted. The glow-in-the-dark weapon is unique to this figure, an experiment that Hasbro opted not to continue in future lines. While it's slightly off-model from the painting, it's quite close, and as a toy I'm a little upset I couldn't get more.

Collector's Notes: Packed at 2 per case in only 1 case (alongside less popular figures who were 1 per case in only 1 case), this figure blew off the shelves, continuing the quasi-curse of Fan's Choice figures: it's either too many or too few. As such, this figure isn't too easy to get. Like many of the better end-of-2003 line, it came and went quickly and was clearanced out as the assortments were discontinued in favor of new SKUs. As such, if you want one, prepare to cough up some decent trade fodder or a small wad of cash that will undoubtedly be greater than six bucks. It is a lovely figure, and while we do hope Hasbro reissues it so I can build a squad of them, I am not hopeful. Well worth tracking down as a collectible, nifty to get as a toy, but for those wanting to streamline their collection this is one you should probably pass on.