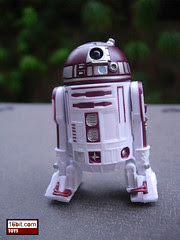 Commentary: Technically this figure of R4-P17 doesn't exist-- in Attack of the Clones he's a dome hardwired to the vehicle and not a removable character. So technically, this is based on the Revenge of the Sith version of the droid, who we also never saw out of the ship because he got taken apart pretty darned quickly. Anyway, this figure is distinct from the 2005 Revenge of the Sith R4-P17 in that he's all cleaned up. This new one is lacking in grime and dirt, and looks quite striking. As with his ancestor, the droid is based on the R4-G9 mold which means he has articulated ankles, shoulders, and the dome-- which rotates to raise and lower the foot. It's just like a lot of the other droids you've seen in stores, or your collection, or in this column, except that with the omission of the grime it basically looks like a new robot in more ways than one. As such, Astromech fans would be well-served to consider this one for their stash.

Collector's Notes: As part of a set of slightly revised figures, odds are this one may not be widely collected. Be sure to grab it if such things are on your wish list.

It's not true that R4 was hardwired to the fighter. At least the dome was removable, as evidenced by the Jedi Hangar cut scene showing a dozen JFs with empty droid slots, and the droids rolling about. Lucas also scripted a scene that had R4 leave the ship with Kenobi on Geonosis. They even started planning on building a body for R4 before the scene was cut. See a pic @ www.angelfire.com/droid/astromechs

The figures have never got this droid's color quite right, either. The movie (and first release of Obi-Wan's fighter) have it a more orange-red. The maroon might be more accurate to what the prop was (if there was a prop, and not just cg), but I think there's still opportunity to re-visit this character in action figure form.