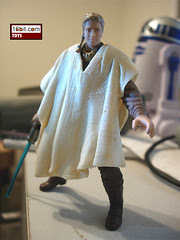 Bio: It has been ten years since young Anakin Skywalker left his desert home to train to become a Jedi Knight. Under the mentorship of Obi-Wan Kenobi, Anakin is assigned to bring Senator Padmé Amidala back to Naboo after she escapes another assassination atempt. Anakin dresses in peasant clothes to hide his Jedi identity. (Taken from the figure's cardback.)

Commentary: This was the first-ever released figure of Anakin Skywalker as a prequel-era adult. He also came out after Hasbro boasted a little about the new use of scanning technology in the development process, which seems to have helped improve the sculpt quality, although the face deco on prequel-era Anakin figures still needs a bit of work. The figure is very pale, and his hair a little too fair, but the costume is basically just fine. The figure has a mere 6 points of articulation, and, to date, is the only version of Anakin in this costume. The goofy vest and sweater-like sleeves are a little odd, and as a toy, it's tough to buy it as a disguise because he has a lightsaber molded into his fist. The level of detail is excellent, and the action mechanisms are really why I liked this figure when it first came out.

As one of the first figures to include magnets, Hasbro included a hunk of metal in the figure's left palm which allows Padawan Skywalker two particularly clever actions. One, it Force-attracts guns with metal in them, such as the one included. This was something that didn't get a lot of play in the movie, but this unique "Force Power" was used elsewhere in the saga and it really did add a magical element to the toy. The hand magnet also could be used to unlock a box included with the figure, a sort of a space trunk with a magnet inside. The hand could be waved over a "lock" which would automatically open when the magnet is dragged along the inside of the box. (And I'm too lazy to make a video to show you, but it's awesome.) If you don't like the look of this figure, I still give it a strong "buy" rating because it's a lot of fun to play with. I know this is a foreign concept to many of you, but the sliding lightsaber and the magnetic features make this a surprisingly great little toy. Sure, his legs won't really fit in most vehicles, and no, the face isn't perfect, but for five to ten bucks it's a fantastic little desk toy. It's simple, ingenious, and a sign of the sort of thinking frequently put in to the line before someone decided the only important things to do with a figure was to include 14 points of articulation as the top priority. A number of "Collection 1" figures in 2002 features little gimmicks like these, and despite improvements in sculpting and articulation many of them are worth grabbing just because unlike their descendants, they actually beg to be played with. Good show, Hasbro!

Collector's Notes: This item was a one-timer in 2002 and has the distinction of being an interesting piece of early misdirection, given that it basically didn't really appear in the movie much. It proved well that if fans don't know what they're buying, and they're ready to buy, they'll pick up pretty much anything. Also, most fans hate this figure. It is worth noting that they are wrong.

Oh, yeah, this figure proves that fans will pick up anything, even a turd.

I'm not a fan of the aesthetic of the figure (I don't like action poses or moulded-in weapons, and the blond hair is poor), but I do like the play features. The trunk in particular is cool, especially the way the lid opens by itself once unlocked.

I was a little confused because the "Availability" said "July 2009". I thought that this was a much older figure. It made more sense when the text said 2002, since that was about the time when the magnet gimmick was released.

Enough with the "Anakin Skywalker - Jedi Hero" repackagings! This figure is in serious need of an update. It features the best Anakin costume we barely saw, with the ascot and exquisite vest (that's the "Sunday best" of outlander peasants, apparently). Just use the "Jedi Hero" head, remake the body, add a soft-goods poncho and voila - the next great Anakin variation.

What I loved about this figure was the vintage-throwback lightsaber action. I think it's the only figure in the modern line to have the ol' saber-up-the-sleeve trick. Plus, as noted, the trunk worked surprisingly well.