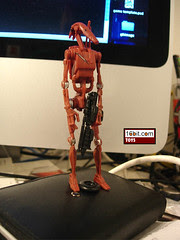 Commentary: There may be no more variations on a single SKU that yielded more significant and different figures than the Battle Droid. This particular release borrows the "slice" pattern seen on earlier figures and applies it to the Attack of the Clones-style red deco. As always, you can take him apart and swap his arms and legs and head with other droids, creating whatever freak designs you want. Perhaps you want something a little "Mystery of a Thousand Moons"-esque. As custom fodder goes this is a useful figure, and as scene filler, it's fantastic. With five points of articulation he can sit just fine and as such should be able to pilot many vehicles without too much trouble. Unfortunately, the plastic is very bendy and the way Hasbro packaged him may result in a figure that doesn't stand on his own very well-- so take note, get some stands ready for this one.

For army builders, these are no-brainers. If you buy every Battle Droid variant you'll have quite the might army!

Collector's Notes: He was packaged with another red droid with "blast marks." They were repacked in the 2008 style packaging, and will probably see many more releases in years to come.

I wouldn't be so sure about many more releases of these. Even though they seemed to sell well, they have not been issued on the current Legends "red cards". Hasbro will want to milk the new Geonosis Arena 2-pack Battle Droid mold now, which will mean single-pack Battle Droids again.