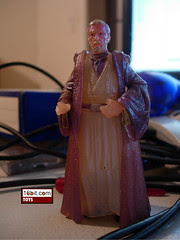 Bio: Obi-Wan Kenobi is a friend of Luke Skywalker, the Rebel hero. In a battle with the evil Darth Vader, Obi-Wan lets Vader win and disappears, becoming part of the Force. His spirit appears to Luke and guides him in his fight to save the galaxy. He tells Luke to find Yoda, who will teach him to be a Jedi Knight and to use the power of the Force to fight Vader. (Taken from the figure's packaging.)

Commentary: Since 1997, Hasbro has tried a few versions of Spirit Obi-Wan. The mail-in one was a nice idea, and it was tweaked slightly for the "Jedi Spirits" Cinema Scene as Power of the Force dwindled. For my money, though, there has been no better release than the 2004 edition-- which is this one. The robe is a little darker than the later "Jedi Training on Dagobah" release, and even though it includes a lightsaber-- presumably due to fan outcry that the previous versions didn't have one-- it's still pretty authentic. The outfit is about right, and it's a mix of new parts plus bits and pieces from a figure released in 2000, but tweaked just a little bit. The likeness is pretty great, and the pearlescent shine to it also works quite well. Articulation is, for the time, pretty good. All meaningful articulation below the waist is crippled by the robes, but shoulders, wrists, and swivel elbows do allow a little bit of movement upstairs. You won't find a better Spirit Obi-Wan yet, so if you can find this one (or one based on this one's release), do so.

Collector's Notes: I consider Wave 1 of The Original Trilogy Collection (Dagobah Obi-Wan, Luke, R2-D2, and Yoda) a required purchase for all Star Wars fans. It's also practically worthless-- but the four figures are loads of fun and can join together to make a nice diorama. Not buying these means that you are part of the problem in this hobby, so get them if you can.

Email ThisBlogThis!Share to TwitterShare to FacebookShare to Pinterest
Labels: Jedi Knights, Obi-Wan Kenobi, OTC, Return of the Jedi, The Empire Strikes Back

While this one has been superseded by recent super articulated, soft goods "Old Ben" figures I'd still like to have a non-spirit painted version of this sculpt.

I can remember when I first got this one six years ago...it was real, genuine excitement to see my very first OTC Basic packaging on the pegs of local stores! Such a visual throwback to my childhood in so many ways...and the Wave 1 figs like Spirit Obi-Wan were pretty excellent as well. I always liked this one a whole lot more than the Frito-Lay figure and the one packed in the Jedi Spirits Cinema Scene...I probably always will. I have three of this one...one carded and two loose with the bases.

One of my favourite figures.

I'd like to see a non-spirit version if this, too.

I'm right there with you, Eddie. I loved the OTC collection. The new figures, the re-paints and the re-packs. This Dagobah foursome was great. I bought two of each, one to open and one to keep carded. They look great on display.