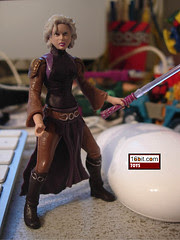 Commentary: In the comic pack assortments, Hasbro never really clearly defined what they were going for-- sometimes we would see a famous character paired with an obscure one, or in the case of Dark Woman, we see her paired with someone else you've probably never heard of. The Dark Woman has an all-new sculpt, but lacks the kind of super articulation fans started to expect and demand in 2007. With only 8 points of articulation, including ball-jointed arms and swivel forearms, there's not a lot going on here to delight fans of over-constructed heroes and villains.

The sculpt is derived from the comic art, but I don't remember specifically where. Her lightsaber is consistent with what I remember, and she always had white hair and looked a little old. But who is she modeled after? Hillary Clinton? Xeni Jardin? Someone's well-endowed aunt? The world may never know, but we can see that the sculpt was nicely done. The face has a lot of personality, the clothing has a lot of creases, and her boots have some nice detailing too. As a bonus, they gave her a little make-up, which helps a lot in the 3 3 /4-inch scale as a lot of sculpting detail is lost at this size. You gotta exaggerate, and having done that Hasbro pulled off a nice figure. Personally, if it meant we'd get more figures for $5 on average, I'd be thrilled to see Hasbro drop the average articulation per figure below 14 points back down to 8 or 10. They're all going to end up on display or in a box anyway, no point wasting money and resources on joints nobody will ever use (with some exceptions, of course.) I personally do not believe this figure would have benefitted from additional articulation.

I agree with the poster above me. 沈舟側畔千帆過，病樹前頭萬木.

Main reason I didn't get this pack because of the articulation. So you are, as usual, wrong about less articulation being any benefit to anything. There's no way Hasbro would drop the regular price that much anyway. Not gonna bappen. It's not 1996-1997 again. If they did, shoot, why not just go back to 6 points of articulation. This Nerd Appeal crap was never meant to be fun toys, was it? It's all about milking money from the geeky and the nostalgic.

I mean, look at the joke that is the Vintage Collection. COLLECTOR ORIENTED series, meaning...retro packaging that probably costs less than the other packaging but the figures are at least 50 cents more. I'll take B.A.D. over that, and I do like retro cards. But I don't buy for the packaging. Why waste money and resources on that?

(You never read these comments. Figure of the Day is just to justify drawers full of figures that will never be worth their original retail prices in our lifetimes.)

Adam: I was catching up on recent figures-of-the-day, and thinking I should comment and thank you for doing this.

Bravo: Speak for yourself.

You want super-articulation? Great. I can see the advantages of that, but I also remember how much fun I had with my original Star Wars figures when I was a kid, with no more than 5 joints each.

Some of us collect these toys because we enjoy them, not because we're at all interested in what they'll be worth in some imagined future. I like looking at Adam's photos, and reading his reviews. And I'd like to think that folks like me are justification enough for him to continue.