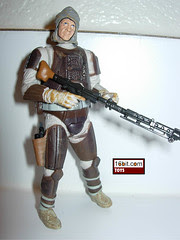 Bio: The vintage line does not have character-specific bios. It just reminds you that these are very old figures. In the case of Dengar, you get a summary that tells you nothing of the character along with a photo and a caption saying the original Dengar card front was used from 1980-1982. I know, shocking.

Commentary: Each version of Dengar has offered something different, with this one adding the most to the design. This one brings more accessories, super-articulation, and what can be best deemed a hyper-realistic head sculpt to the table. While very realistic, there's a black outline around Dengar's face due to how the head was made which makes him seem less like a toy and more like an Adam Hughes painting in three dimensions. This isn't a knock against it, I like this illusion and I think it brings a lot of personality to a figure that, in all honesty, is yet another version of something you weren't asking for in the first place.

The single oddest element of this figure is a removable codpiece. That's right, the armor around his crotch comes off and allows for the legs to be posed so he can sit properly-- a very unusual move. So Hasbro did something that makes it more appealing to both kids and collectors, until, of course, you lose the codpiece and then are screwed. It's a little loose, but a careful collector should be able to keep it on without too much trouble. The armor is basically spot-on to the designs you're used to seeing, There's even a holster, which, while slightly different than that of the movie, works great. It even has a little pistol in there, which is a nice added (and unexpected) detail.

Hasbro's expert sculptors really did a bang-up job on this one, and the added articulation allows him to assume numerous poses. This is particularly notable because the previous 1997 and 2004 (and of course 1980) versions were rather stiff and limited in how they could be presented. Dengar can hold the rifle with both hands, or aim it, or just hang out and look cool. I even got some great poses out of him using the new Hasbro "battle game" stands, which, I might add, they should sell by the bucket. When first presented with the notion of Yet Another Dengar, I have to admit, I was skeptical. But this figure is great, Hasbro actually nailed him and now I assume this will be the last new sculpt of the figure. It's just that great. If you have any interest in Dengar, go get this one. Your previous versions will probably never be touched again.

Collector's Notes: As a new figure we don't know what to expect from Dengar yet. He's a good upgrade of the previous figure, so it should be popular for a while. It wouldn't stun me to see him hanging around unless Hasbro is deliberately shorting the market, even though he's superb odds are kids will not be interested.

Vintage Notes: The early line looks pretty strong. Dengar is good, Bespin Luke is good, most of the figures are on par with or superior to most previously released lines. There are some weak spots. Darth Vader, for example, is identical to the 2010 Saga Legends figure which sells for at least $1 cheaper and includes more gear. The cards from a sealed case come punched, so don't go looking for unpunched variants just yet. There's a tiny order form inside for mail-in Boba Fett, which accepts literally every basic carded figure's UPC since August 2008. Nice. It isn't free, though, it's actually $6.99 + UPCs.

Email ThisBlogThis!Share to TwitterShare to FacebookShare to Pinterest
Labels: Bounty Hunters, The Empire Strikes Back, TVC

yeah, wasted my money on that Vader. When will Hasbro give us a removable helmet vader that can hold his lightsabre in his right hand ???? Like wot he does in the films.

Didn't get Dengar. Will have to now. Curse you Adam !

I miss the character bios on the Vintage packaging. Sure, I already know who Dengar is, but a lot of kids probably don't.
At least there's a lot less plastic garbage to throw out with the "coffin" style blister. Which you'd think would make them less expensive too, but I guess not.

I wrote the Assortments accepted from the Boba Fett, and thought only the new figures qualified?

this version of dengar is so detailed! i mean, look at that head sculpt! the mottled skin around the scar, the way the head wrappings shape the face, the copper colored buttons that--hey wait a minute, the fuck? where are buttons that pin dengar's head wrappings together? you guys know, the buttons under his chin. the buttons that every other fucking hasbro iteration of dengar did not fail to include! the fuck?! even the kenner dengar from the 80s had them! the fuck?!

if i read one more fucking review that aggrandizes the 'movie accurate' details of this figure.... how come everybody fails to see this mistake?? it's pretty damn noticeable. seriously, nobody on the interweb has commented on it! are you all blind?!

it just pisses me off because a) the figure is perfect EXCEPT... b) hasbro could have easily corrected this fairly noticeable error c) hasbro probably did this on purpose just so they can sell future upgrades d) asshole schmucks like myself will buy the future upgrades e) the future upgrades will have previously missing details like said buttons, but will probably exclude a particularly detail that this current dengar has.

hasbro always does shit like this. they'll never make an entirely movie accurate figure not because they can't, but because it's not in their best interest for future business. i hate them. i hate myself. fuck!

...dengar...i have to go to target now and spend $9.99. maybe i'll paint the buttons on myself...i have been known to display obsessive behavior, such as painting missing minute film details on particular figures...dengar's buttons)....